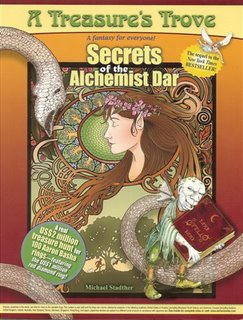 This book is an odd mixture. Most of it is the colourfully-illustrated story of Zac the woodcarver and Ana his half-elf wife. The evil fairies plan to kill all good fairies but even as Dar the alchemist casts the final spell he is thwarted by Zac and his doths (half-dog, half moth). Normally this story would only appeal to people found in the pink shelves of The Warehouse.
The remainder of the book, however, is a complex puzzle involving codes, secret alphabets and pages that have to be held up to the light. The author-illustrator, Michael Stadther, has developed an alphabet which reads differently upside down, so that “light” for example becomes “dark”. By decoding the various spells and using words concealed within some of the illustrations, you may win a valuable ring. Or you may not – the rules take up five pages! If you know any shrewd puzzlers, who can read sentences backwards, this is the Christmas present for them.
Trevor Agnew
First published in The Press, Christchurch, New Zealand, on November 25th 2006
Posted by Trevor Agnew at 13:58