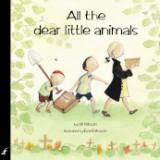 Giraffes driving convertibles? Children holding bird funerals? A sheik coming to dinner? A ewe with a philosophy of life? With a motto of “curiously good books from around the world” New Zealand’s Gecko Press introduces Kiwis to the best of modern European literature for the young. Gecko’s output continues to be splendid as their latest quartet proves.

If a green tractor is being approached by street-entertainer Gorilla, railway guard Gecko, green-gumbooted farmer Pig and doctor Mule, the obvious question is Who’s Driving? Young readers will have great fun matching the key-carrying, well-dressed animals to their amazing modes of transport. Leo Trimmer’s colourful double-page spreads of fire-engines and monoplanes are both attractive and funny. The question of which beastly driver will arrive first will not baffle young readers who have spotted Hare in the racing car. This Belgian title was translated by Christchurch’s Bill Nagelkerke.
Ages: 4-up.

In All the dear little animals three bored children find a dead bumblebee, so Esther, the bossy one, makes them bury it in a cigar box. Before long they have a new game – holding funerals for dead wildlife. “Esther’s job was to dig. I would write the poems. And Puttie would cry.” Before the day is over they have erected tiny crosses over a departed mouse, hamster, rooster and three dead fish that Esther found in the fridge. Each of the children learns something about death as they scour the roadside for flattened hedgehogs. When Esther reassures young Puttie that he won’t die until he is an old man, he responds, “But Mummy and Daddy will be so sad.” Sweden’s Ulf Nilsson has created a very funny account of children at play which also introduces serious issues of grief and mourning. Eva Eriksson’s colour illustrations are beautiful and the book is neither morbid nor mawkish. The children know they are playing a game. “The next day we found something else to do. Something completely different.”
7-up.

My Friend Percy & the Sheik is the second volume in Ulf Stark’s very funny trilogy about young Ulf and his unsuitable friend Percy. Plagued by a bully Ulf tries hypnotism with unexpected results. Did he really hypnotise Percy into doing well at maths and Marianne into kissing him? The sleepy Swedish town of Stureby is startled when Prince Talal of Saudi Arabia visits Ulf’s father, his fellow radio enthusiast. The Sheikh copes well with the pork in his potato dumplings and even enjoys beating Ulf at table hockey.
Then Ulf thinks of a way the Sheik might cheer Percy up and achieves a success beyond his dreams. The dry humour of these tales is always appealing, especially when Marianne asks Ulf what he wants most in the world. Ulf replies, “A dog.” Marianne lets go of his arm.
10-up.

First published in The Press, Christchurch, New Zealand in Dec 2006
Posted by Trevor Agnew at 10:49