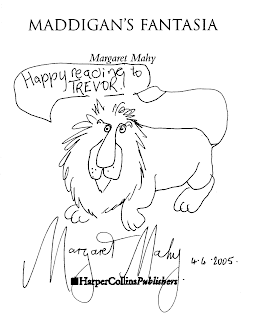 “Margaret, we fly in your wake. You have the gift of the alchemist, spinning dross into a web of enchantment.” – Joy Cowley (at MM’s 70th Birthday Gala Dinner, 11 March 2006)

Margaret Mahy’s death is a loss which hits everyone because she wrote books for all ages. This means that everyone has their favourite MM book firmly linked to that joyous moment in their life when they discovered the Mahy magic. Margaret Mahy wasn’t just a writer either. She was a gifted genius who was generous with her time and talents, helping other writers, encouraging readers and making the world a better place.
She always took time to talk to children, with whom she always had an instant rapport, and she would spend hours autographing their copies of her books, often doodling Abyssinian lions and skateboarding crocodiles.

Above all, Margaret Mahy was a born story-teller. When she gave me directions to her home, I suddenly realised she was telling it as a story. “Come up the main road through Governors Bay to where the pub and the café are guarding either side of the road; take the turning down to the left to the jetty…”

She did the same thing when I rang to see she was all right after one of the earthquakes.
Her reply created a wonderful image in my mind, “Apart from the fact that my recipe books all came charging off the shelf, I didn’t do too badly.”
The idea of charging cookbooks is a very Mahy word picture. It becomes easy to see how she has invented characters like Iris La Bonga, Mrs Discombobulous, the Birthday Burglar and – my personal favourite – the heroine of The Librarian and the Robbers, Miss Serena Laburnum.


Margaret Mahy’s comfortable lounge had large sofas, lovely paintings and a view over Governors Bay. Above the Halswell stone fireplace were two stone lions, one with a quill in its mouth, while her amiable poodle Baxter, hero of the story Dashing Dog,
remained at floor level. Books were neatly stacked on the coffee table, and two of the walls had fitted bookshelves reaching to the ceiling high above. These held collections of myths and legends, Maori history, New Zealand history, Isabel M. Peacocke’s The Runaway Princess, May Grant Bruce’s Back to Billabong, Arthur Mee’s Encyclopaedia and even Margaret’s mother’s school prize for sewing.

This marvellous room reflects so many of the wonderful stories she wrote. I was there in 2005 to interview her about Maddigan’s Fantasia, which was appearing as both a novel and a TV series (later retitled Maddigan’s Quest). In fact our conversation also rambled over Chinese acrobats, Hitler’s last days, pavlovas, Pepys’ diaries, the fragrance of wine, New Scientist magazine and the letter British author Russell Hoban sent her, simply addressed to ‘Margaret Mahy, Christchurch, New Zealand.’ (It was delivered, of course.)

Although she was one of the world’s best-known writers, she was also extremely modest. I once pointed out she must be the world’s most famous librarian. “Oh no, I shouldn’t think so,” she said. “I wouldn’t stand up against either Mao Tse-Tung or Casanova. I had forgotten about Philip Larkin.” She was not only modest but had a brilliantly well-stocked mind as well.

Tessa Duder, Margaret’s biographer, once suggested Margaret Mahy was becoming the ‘living symbol of our nation’s literature and creativity.’ When I mentioned this to Margaret, she replied, ‘I think that’s rubbish.’ Like it or not, it’s also true.

The great thing about Margaret was that she found joy in everything she did. Even when her plucky little Mini struck trouble on the hill above Governors Bay and began gushing clouds of smoke, she still saw the positive side. With the car threatening to explode, she encouraged her daughters to run to safety by shouting, ‘Look on this as an adventure!’

Her wonderful novels and amusing picture books – over two hundred of them - have introduced generations of children to all sorts of adventures of the imagination. Think of Memory and The Catalogue of the Universe, Jam and The Witch in the Cherry Tree. Then there are her magnificent poems, like Bubble Trouble, and another 80 or so short stories like The Downhill Crocodile Whiz. It is a magical legacy unmatched by any other writer.

The Margaret Mahy we knew and loved may have died but through her writing, her imagination will continue to captivate readers around the world for ever. Margaret Mahy is dead. Long live Margaret Mahy!