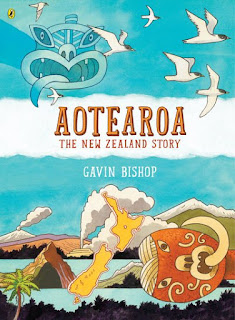 Aotearoa: The New Zealand Story is such a wonderful book that I have only ever heard one criticism of it.  A senior literary figure, referring to page 53, expressed surprise that there was a portrait of Sister Mary Leo but no picture of her most famous pupil. It gives me great pleasure that one day when she looks at page 54, ‘Some People Who Told Our Stories,’ she will find a portrait of Kiri Te Kanawa, neatly placed between Peter Jackson and Colin McCahon. And she will find it because this is a book that demands to be read again and again.

No one can blame the senior literary figure for not spotting Kiri on her first reading. Every one of the 64 pages of this large format hardback carries a wealth of detail. That’s because Gavin Bishop has had to pack in 150 million years of history between the front endpapers (where pterodactyls fly in) and the back endpapers (where birds fly out).

I was lucky enough to hear Gavin Bishop talk about the creation of Aotearoa and to see his original illustrations, along with outline pages and concept sketches. The underlying design motif is based on the Maori pantheon, so that the symbolic curved forms of Ranginui the sky father and Papatuanuku the sky mother can be seen in many illustrations. (That's them on the cover - above.) Unfortunately the sinister figure of Tumatuaenga the god of war is also present on all too many pages of our history.


Across this subtle framework and a remarkable range of symbolic maps, Gavin Bishop has sketched in a broad overview of some of our shared experiences. Here are the first settlers and the latest refugees. Here are the homes we made from raupo hut to corrugated iron bach. These are the names we gave to the land. This is where we worked. These are the conflicts we fought, the settlements we built, the crops we grew, the schools we went to, the suffering we shared, the monuments we erected, the games we played and the stories we told.


In Gavin’s talk, he frequently mentioned the pressure on space and how much he had to leave out. “The challenge of this book was to know what to leave out,” he explained. Given this, it is amazing how much he has managed to include without overloading his pages. His aim was to include “lots of pithy little pieces of information.” To mention only one letter of the alphabet, Aotearoa offers polar dinosaurs, Precious McKenzie, pineapple chunks, Pixie Town, paraoa parai [fried bread], Princess Te Puea, pepe-tuna (puriri moth), Plunket rooms and the world’s ugliest pepper-and-salt set – shaped like New Zealand.


Then there are the colours. Many pages have a light blue background, often reflecting sea or sky. “I wanted to use a lot of blue, so I mixed up a large quantity to keep the same shade throughout.” He also described his technique of sprinkling salt on the watercolours while they are still wet. When the pictures had dried, he brushed the salt off. “You get the most beautiful effect.” More sombre topics such as the New Zealand Wars and the Long Depression have grimmer reds and greys in their backgrounds.


Nestled in among the historical figures are ordinary people – such as a small boy mowing the lawn, and a land girl working on a wartime farm. Charmingly, some of the people depicted are real members of the author’s family. Thus his father is seen at El Alamein and his great-grandmother, Irihapeti Hahau, appears as a supporter of Kingitanga. (“My great-grandmother. Why not?” asked Gavin.) The spirit of Gavin’s tribal ancestral figure, Hinepau, can be found on every page. We can also find his wife, grandmother, grandfather, cousin, brother and honeymooning parents among the models in the Clothes section. There is even a tiny (and unflattering) illustration of Gavin himself among a group of storytellers. This family thread in the weaving is a marvellous idea, because it gives every reader the impetus to fit their own lives and their family story into the events shown.


The result is a delight, a personal vision of the history of our country in word and picture, a triumph of good design and a celebration of all those who have contributed to our national identity. Aotearoa is the book of the year, perhaps even the book of the decade.


Best of all it attracts readers like a magnet. Aotearoa, with its richness of detail, has the same fascination for young readers as the Guinness Book of Records. They carry it around, reading bits out aloud. What better advertisement could there be for a book?