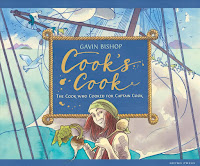 
This picture book is a strikingly original and cheerful addition to the rather stodgy books about Lieutenant Cook’s 1768-1770 voyage as captain of the sea-going equivalent of a coal-truck. Cook’s Cook is nicely timed to complement the 250th Anniversary of the scientific and exploring voyage of the Endeavour.  With 94 people packed into a Whitby collier, a bark built for 16, life on board was never going to be easy. The story begins as Cook discovers that the Admiralty has sent the ship’s cook.


‘John Thompson – a one-handed cook!?’ explodes Cook.
‘Don’t worry, Mr Cook,’ soothes his wife, Elizabeth, ‘Things will work out.’
And they do.


Thompson, the single-handed cook who narrates this story, is a gruff but adaptable old sea-dog. ‘How’d I lose my hand? None of your bleedin’ business.’


The routine diet of pease porridge one day and salt beef or salt pork the next sounds grim but Thompson proves versatile at using local resources. During the voyage he cooks and provides recipes for sharks, albatrosses, geese, stingrays, turtles and kangaroos. He also provides an insight into interactions with the people they encountered. We are all familiar with stories of Tahitians stealing metal objects from Endeavour (including the cook’s fire rake) but Thomson makes us realise that by gathering fruit and vegetables, the visitors were also stealing from the Tahitians. Cook’s plan to eat a fat goose and turkey were also thwarted. ‘H.M.S. Dolphin left fowl behind some years ago, and they’ve become pets.’


With his left hand, Thompson keeps a cook’s log, which provides a quirky running commentary on the events of the voyage.  For example, in March 1770 it becomes clear that New Zealand is not part of the vast southern land that Joseph Banks had hoped for. Thompson writes, ‘We have not found the Great Southern Continent. For Mr Banks and several other continent-mongers, such was their disappointment that they were sick after supper. Can’t blame my left-over dog pie.’


Actually Thompson had made a roast dish and a haggis from the dog, as well as the pie. For those with a canine taste bud, Gavin Bishop has provided a butcher’s diagram of a dog, while Thompson has included the recipe for his Tahitian specialty, Dog and Breadfruit Stew.


There is an enjoyable running joke throughout the book as Thompson aspires to have a feature named after himself, but is always thwarted. He is, however, responsible for one of New Zealand’s most original place-names and even includes the recipe for it.


The illustrations are splendid water colours, full of the rich 18th Century detail which Bishop lavished on his edition of Tom Thumb. Each double-page spread has its own unifying theme, but is also full of tiny details, like Thompson’s ever-present wooden spoon. The plan of the ship, for example, shows that each of the gentlemen’s cabins contains a chamber pot.


The features, which we have come to relish in Bishop’s earlier picture books, return in unexpected places in Cook’s Cook. The turnip from The Three Pigs has a place of honour on the cover. The rats from Rats seem to be everywhere. Thompson never sees the legendary big-footed Patagonians but the cliff formation that Banks and Solander encounter is actually a gigantic monster’s foot straight from The Horror of Hickory Bay.  While Cook is in New Zealand waters, the eyes of the Maori ancestral gods and spirits observe proceedings, just as they do in The House that Jack Built.


I was puzzled at how Bishop would conclude John Thompson’s story but he has done it brilliantly, with a breath-taking display of story-telling skill. I won’t spoil the surprise and delight of the last pages, except to say that the tale continues right on to the final endpapers where 38 seagulls fly over the map of Endeavour’s voyage. Each port of call on the map is identified by the dish which Thompson served there. ‘Pease porridge’ predominates.


With Cook’s Cook, Bishop has brought a whole new perspective to the voyage, yet his carefully-absorbed historical knowledge also enlivens and illuminates every page.  Children’s literature can now boast not one but two roguishly endearing sea-cooks.