‘Your eyes are green,’ she said, ‘and shaped like a cat’s. Your hair is black and your skin is golden.’ He flinched when she patted his face. ‘You’re very pretty for a boy.’

Poor Lizard doesn’t appreciate the scrutiny he receives from Georgina Whitford Jones. The daughter of a wealthy British businessman, Georgina has interrupted Lizard while he is stealing a box from her father’s suite in Raffle’s Hotel, Singapore. Georgina has the ruthless bluntness of power and privilege.

‘You’re not Indian, though. What are you?’

Lizard doesn’t know the answer to that one. Nor can he say where he lives or what he does. ‘He was very good at climbing and hiding and, he was ashamed to admit, stealing.’

Lizard’s Tale has to be the best young adult novel of the year. Set in Singapore in the tense months 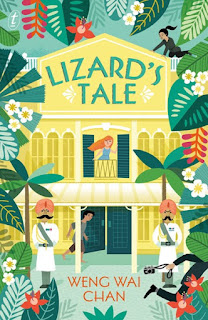 before the Japanese invasion, it is a page-turning account of Lizard’s accidental involvement in international intrigue and espionage. Despite this somber setting, it is also pleasantly amusing.

Lizard’s climbing, hiding and stealing, skills are useful for a Chinese-English orphan boy who scratches a living in Chinatown by running errands for a small-time crook. What Lizard soon discovers is that the contents of the box he has purloined are of international importance. So important, in fact, that people are ready to kill to obtain them. Various spies and diplomatic and military figures are soon chasing the box (and Lizard). Luckily Lizard is friends with Lili Mak, who has skills that he is unaware of. She is training as a spy!

An inspired aspect of this story is that several of the key spies (and would-be spies) are young people, chosen because they are not usually noticed by adults. As soon as Lili picks up a watering can, for example, she is mistaken for a gardener and ignored.

I enjoyed the way that Wang Wai Chen has given Lizard characteristics which reflect his dual British and Chinese heritage.  Sometimes he’s marching briskly like his ex-Royal Navy Uncle Archibald, while at other times he’s carefully packing a kitchen cleaver away, because  ‘a Chinese chopper always got respect.’

There is a great deal of humour in this story, especially when Lili and Lizard carefully (and independently) plan schemes which accidentally de-rail each other. Lizard is also blissfully unaware of Lili’s romantic interest in him, which produces some gently humorous writing of a high order.

Lizard’s Tale is a great Young Adult novel. It has a well-evoked setting, a fast-moving narrative, some sharply-sketched characters and plenty of cliff-hangers. The conclusion is also nicely set up for a wartime sequel. Enjoy.

Note: I normally review NZ children’s and young adults’ books for The Source [magpies.net.au], (a website run by the creators of Magpies magazine), which is a searchable database of young people’s novels, picture books, short stories and poems. I had read Lizard’s Tale, enjoyed it but found that because it has an Australian publisher, it had already been entered on The Source.

At the Christchurch Word Festival in Spring 2020, I met the author and found that she lived in Auckland. So here’s my belated review, a reminder that yet another talented young Kiwi writer is on the scene.