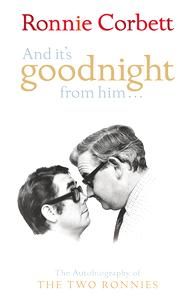 I approached this “autobiography of The Two Ronnies” with trepidation. I had always enjoyed The Two Ronnies, with only one reservation. In each episode Ronnie Corbett would appear, seated in a large chair, to tell a joke. Inevitably his ramblings, repetitions and meanderings killed the joke. So the first question is Can Ronnie Corbett tell a story?
The news is good. While there are enough ramblings, repetitions and meanderings to confirm that this book is indeed based on Ronnie Corbett’s own words, somebody has shaped them into an agreeably structured and readable format. Corbett gives a graceful credit to his fellow writer, David Nobbs (the creator of Reggie Perrin) “for lending this book his truly light touch and splendid way with words.” David Nobbs deserves every penny they paid him.
This book is a splendid evocation of a television phenomenon and a fitting tribute to the talent of Ronnie Barker, who died just over a year ago. It documents Barker’s talent as an actor and a comedian, along with the painstaking care he took over each production. It also tells of his remarkable secret script-writing career as Gerald Wiley. Barker wanted his work to be judged on its own merits, and it was. At one point both Tom Stoppard and Noel Coward were suspected of being Wiley.

While Corbett has always been happy to appear as himself on the screen he acknowledges that Barker was a very private person who preferred not to be himself for the cameras. In fact he went to great pains to avoid it, turning up at banquets as a slovenly waiter or as Fletcher from his prison comedy series Porridge, handcuffed to Fulton Mackay. When he met the Queen mother at the Palladium, he used another persona:
“Your puh-puh-programme, Your Majesty.”
“Lovely, Mr Arkwright.”
“That’ll be two guineas please.”

The Two Ronnies ran from 1971 to 1986 but only occupied the pair for four months of each year, leaving them time to develop their own separate careers. Corbett did Sorry and Barker did Porridge and Open All Hours. “In some ways, our relationship was a bit like an open marriage,” writes Corbett
The two friends only had one disagreement in their entire collaboration and that was such a funny affair, revealing Barker’s ability to improvise under pressure, that I won’t spoil the pleasure of reading it at length.

Although Corbett makes it clear that the taping of the shows was in itself a very unexciting business, he does interest us in the way the series made full use of both their individual talents and their inspired teamwork. Barker’s verbal dexterity and Corbett’s skilful timing can be seen in the newsreaders’ word play, double entendres, party conversations, comic sketches, spoof serials and, above all, the marvellous musical numbers. Their comic country and western duo, Jehosophat and Jones was my first introduction to The Two Ronnies and I still recall my delight at spotting Barker and Corbett under the whiskers.
Generous extracts from the scripts (including one by Michael Palin and Terry Jones) are included, along with a good selection of photographs. The excellent index means that this book is more than just a memoir; it is a permanent record of an important aspect of British television comedy.

Finally, I can see that I owe Ronnie Corbett an apology. His personal “spot in the chair” in each episode was actually a carefully scripted contribution. Spike Mullins wrote the first fifty after telling Corbett, “I’ve noticed that when you do your introductions you waffle a bit. I think I could waffle a bit better for you.” Corbett even prints a three page one in full and – yes – it is rambling, repetitions and meandering but it is also funny.

The Two Ronnies was a cheerful family entertainment of a kind that they don’t make any more. This is an agreeable book for all those who remember the series, highly readable and rich in nostalgia. For those who have never seen The Two Ronnies, try watching UKTV at 10pm on Saturday night.

First published in The Press, Christchurch, New Zealand on November 25th 2006.
Posted by Trevor Agnew at 21:04