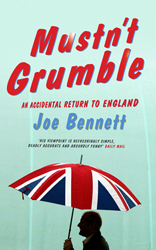 That's the British cover on the left and the much spiffier New Zealand version on the right.

An injured West Coaster, asked by an ambulance attendant what day it was, showed that he retained his full faculties by replying that it was Bennett day. It was indeed Wednesday, the day that Joe Bennett’s column appears in The Press. The good news is that there is enough of Joe’s quintessential mixture of wit and wisdom in this book to totally rejuvenate the entire West Coast and most of Southland.

When I first learned that Joe had based this book on Morton’s work, I naturally assumed that it was J.B. Morton, alias Beachcomber, the other witty writer. Instead I was surprised to find that the Morton he was following was H.V. Morton. In the mid-20th Century his urbane travel books from In Search of Scotland to In the Steps of Saint Paul, were a staple in every library and living-room, and the Christchurch public library still has some copies stored away.
Thus in Mustn’t Grumble we get a triple view of England. Joe sets down his 21st Century impressions from when he visited in April last year (before the Underground Bombing) and then compares and contrasts them with both Morton’s bucolic vision and Joe’s own memories of his youth. (We even find the reason Joe left England.) Then Joe’s passion for literature gives a delightful fourth layer to this account.

The only writer whose region he consciously seeks out is Philip Larkin but Joe responds with joy to encountering Slad, the village Laurie Lee walked out from and rests in the sun on John Betjeman’s grave, where a card says, “For all the happy years of poetry, churches and railways, thank you.”

There is also a dive into low literature. The Famous Five – “those rural paragons” – are never far from Joe’s thoughts. Some of the people Morton met are so bucolically Blytonish that Joe suspects Morton of making them up. “He was giving his audience the England they wanted to be given.” Certainly you would never have guessed that Morton was touring a country in the throes of the General Strike. Joe was there during the General Election and captures the disenchanted mood nicely, though of course nobody grumbles.

Following Morton may seem a bit contrived but in practice it works well. “When Morton wanted to view the Mappa Mundi in Hereford Cathedral, he had only to open a pair of oak doors.” The historic map is now sealed in a display case, so Joe, typically, asks after the oak doors and is duly shown them displayed on an office wall. Enchanted by the drawing of Cree Hill on the Mappa Mundi, Joe then locates the hill and climbs past the radar scanners to the summit. “Most of England is spread out like a rumpled grey-green tablecloth.”

As he roams the giant tablecloth , Joe is not afraid to ask the big questions. “When did anyone last use a warming pan and how come there are so many? Is there a factory still making them for pubs, along with horse brasses?”

Joe also has the typically New Zealand experience at Ludlow. When he says good morning, a woman asks, “Are you Kiwi?” “She was brought up five miles from where I now live, beside a bay where I walk my dogs,” he marvels.

Like Bill Bryson and the fat man on the bicycle, Joe loves England with a rueful affection. On the beach at Cromer, elderly couples sit behind windbreaks with rugs and thermos flasks. “Down on the beach, a lad in a wetsuit illustrates why surfing is not an indigenous English sport. His hands, feet and face are blue.”

Joe’s journey and his book both end at Norwich, where they’re taping Antiques Roadshow in the cathedral cloister. As always, it is the behaviour of the English that fascinates Joe and makes Mustn’t Grumble so readable. The suddenly wealthy owner of an old teddy bear “wants to grin and to yelp with delight, but the more seemly thing is to appear decently astonished. And oh how hard he tries. The emphasis is on that most English of things, conduct.” Since the southeast quarter of England, including the capital remains untouched, this leaves us with the hope that we may yet read Joe Bennett on how the people of London and the Home Counties conduct themselves.
Posted by Trevor Agnew at 21:10