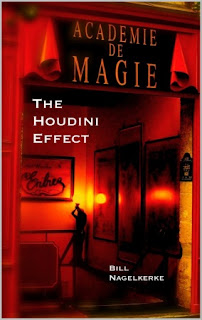 With the world of publishing changing so rapidly, novels for young New Zealanders are becoming an endangered species. Publish-your-own and electronic publishing are two ways being used to keep the genre alive.


The Houdini Effect (2016) is both an electronic novel and a self- published novel by Bill Nagelkerke, an experienced and skilful New Zealand writer.  It is based on the continuing appeal of the intriguing career of Harry Houdini (1874-1926), who achieved world fame as a magician, illusionist and escape artist.


The narrator of the story is Athens, who is doubly burdened by her odd Christian name and the antics of her irritating young brother, Harry. Inspired by Houdini, young Harry works hard to emulate his hero, performing his magic tricks and illusions. Because their parents are pre-occupied with their own activities, Athens and Harry have plenty of scope for their own activities.


“I am an aspiring writer and writers are as bad, if not worse, liars than magicians,” complains Athens, who narrates this story. She keeps seeing odd visions in the many mirrors that hang in the old house that her family have just moved into. Images of the previous owner of the house appear and vanish, as though someone is flicking through a photo album. At first, Athens blames Harry, who often talks of ‘smoke and mirrors,’ but his interest has now moved to escapology.


“Houdini could escape from anything,” Harry declares, although his efforts with a borrowed strait-jacket always end ignominiously with Athens having to release him. To her surprise Harry enters a TV talent show, where he proposes to perform ‘the Houdini Effect, which is an escape from a chained and padlocked chest. Again, he needs Athens’ assistance. Athens is mortified to find that her role will be to ‘wave and point,’ in order to distract their audience at the crucial moment.


Even as Athens helps Harry to prepare for their public performance of the chest-escape, the strange visions in the mirrors continue to worry her. The tension is carefully maintained even as Athens frets about her relations with her friends, a possible romantic interest and


Athens is a delightful but controlling narrator, who keeps adding explanations in brackets. (‘I’m not only a word freak but also a words-in-parentheses freak.’) Through Athens' exasperated account, Bill Nagelkerke creates an amusing picture of an odd family of slightly obsessive enthusiasts, which is reminiscent of Margaret Mahy’s novels.


There are plenty of quirky characters and witty comments as well as a satisfyingly dramatic conclusion, which brings together the television performance and the explanation of the images in the mirror. Athens waves and points with great skill, and so her readers are intrigued, delighted, and entertained by an amusing and skilfully-written novel.

Note: Both Bill Nagelkerke and Harry recommend the biography Escape!: The Story of The Great Houdini (2006) by Sid Fleischman.
Posted by Trevor Agnew at 19:32