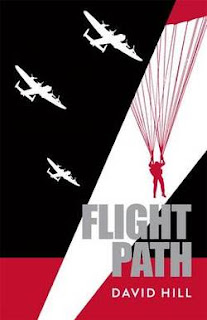 Some of David Hill’s best writing has been seen in his recent military history series of YA novels.  Brave Company (2013) showed young readers what navy life in a war zone was like and taught a lesson about real courage. Enemy Camp (2016) cast light on a little-known tragedy in New Zealand’s history, where misunderstandings and conflicting cultural attitudes in a prisoner-of-war camp had fatal results. The strongest of these novels, My Brother’s War (2012) vividly reflected the split in New Zealand society created by the controversy over conscientious objectors in the Great War.
With the Navy, the Home Front and the Army taken care of, that only leaves the Air Force.
In Flight Path, Hill has taken one of the war’s most long-running controversies – the role of Bomber Command.
Like many New Zealanders joining the RAF, Jack Sinclair has done his flight training in Canada and he arrives in Britain as preparations begin for D-Day. He and his fellow Lancaster crewmen are amazingly young – Jack is only 18 and the oldest is 21. They are also a cosmopolitan bunch, with an English pilot, a Free Polish co-pilot, an Australian radio operator and three New Zealanders (including twins from Christchurch) manning the guns and doing the navigation. Jack is the bomb-aimer, which means he has a bird’s eye view of the destruction 489 Squadron sows nightly over occupied Europe. Here, their plane takes part in a raid on the battleship Tirpitz: “Flak curved upwards out of the whiteness. Ahead of them, the left wing of a Wellington disintegrated.  The bomber staggered, then cartwheeled down, smashing into the fjord’s rocky sides. Flames from ruptured fuel tanks hurtled towards the water in a fiery sheet. No parachutes; no survivors.”
His experiences and the scenes he witnesses force Jack to think hard about the conflict and the deaths that constantly surround them. The novel provides a good range of attitudes to the war and its effect on people. There is a gentle romantic thread as jack learns about girls. Jack also learns a lot about how people behave (and misbehave) under stress. Booze and the black market become facts of life.
Then there is the mental strain of mission after mission.  A temporary replacement gunner cracks under the stress. “Colin stood, head down, still shaking.” Colin is dishonourably discharged. Nightmares of being trapped in a burning plane begin to haunt Jack.
Hill has researched well and raises his narrative far above the old war-comic level. There are moments of bravery – Jack booting at a stuck bomb-load to clear the bomb bay – but he merely reflects, “We have jobs and we have to do what we’re told in those jobs…”
Another strong feature of this story is the trust the flight crew have in each other; they rely on the combination of all their specialist skills to survive. (Hill has always excelled at stories about team-work.)
The concluding chapters, where death seems likely are particularly exciting and contain an unexpected insight into wartime attitudes. Flight Path is a well-written and exciting story with a strong message.
- Trevor Agnew