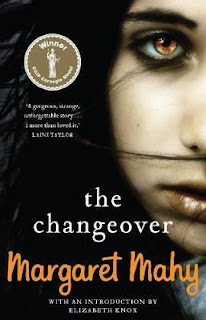 
It was an amazingly enriching experience to be typing up my thoughts on The Changeover while listening to Bridget Mahy and Miranda Harcourt being interviewed by Charlotte Graham on RNZ National’s Saturday morning about both the novel and the forthcoming film. Bridget recalled her mother reading drafts to her as part of the creative process, while Miranda’s first experience of The Changeover was narrating a 20-part radio version when she was a young actor. Now she and her husband, Stuart McKenzie, are in the process of editing their finished film.


In their discussion (which can still be heard via the RNZ website at http://www.radionz.co.nz/national/programmes/saturday ) they mentioned the excitement for New Zealanders of encountering local places and faces in fiction. Charlotte quoted from Elizabeth Knox’s superb introduction to this edition, “I was thrilled by the appearance of the local in a book of fantasy.” Bridget responded that we all love to read some aspect of our own world or to have it come back to us through writers’ interpretations. Just so.


Much has changed since The Changeover was first published in 1984. On re-reading the first page, I was struck by Laura’s examination of her shampoo bottle, specifically the contrast between the exotic “Paris” label and its mundane footnote “Made in New Zealand, Wisdom Laboratories, Paraparaumu.”  Today’s young New Zealand readers will never experience the exciting jolt that the metaphorical “Made in New Zealand” once brought to us back then. Much of our reading material came to us from overseas and we all developed the Kiwi trick of being able to instantly spot the capitals N and Z in any page of text.


For New Zealand writers, overseas publication was proof of success. In the 1980s Margaret Mahy was one of the few who had seized that elusive golden ring. True, some of her poems and picture books had an English feel to them – a reflection of the way our schools, our culture, our world, functioned then. Yet here was The Changeover with its brazen declaration of difference. Not just made in New Zealand but in Paraparaumu; the unlikely pairing with Paris a reminder that Margaret Mahy was always a skilled practitioner of word magic.


Margaret Mahy also knew how to create plots with all the power of ancient mythology. And she knew how to create characters so real that they seemed to live in the next street.  We have all met a Laura somewhere.  In The Changeover, Laura Chant is the teenage daughter who is feeling overlooked, while her harassed solo mother, Kate, struggles to cope with all the pressures of a limited budget, thankless job, and recalcitrant car. Left to mind her young brother, Jacko, put-upon Laura becomes aware of a strange otherness – a sense of being warned of danger by her older self. The messages seem to come through her reflections in mirrors – the first of many echoes of old folk tales.


Laura is worried. Do her strange insights make her a witch? Perhaps her school prefect, the enigmatic Sorry Carlisle is a witch? Her sense of dread seems to involve her beloved brother Jacko and, sure enough, in Carmody Braque’s tiny toyshop, she senses “something very wrong and unable to conceal its wrongness.”


In a parody of the librarian stamping an animal onto Jacko’s right hand, the sinister Braque stamps his own image onto Jacko’s left hand. (Sinister indeed.) “Mr Braque pounced with great agility, like an elderly mantis on an innocent fly.” This is only one of many superb similes and marvellous metaphors that lie in wait for the reader.


In the days that follow, as all Jacko’s vigour is sucked from him, we see Laura blaming herself for failing to protect her brother and desperately seeking a way to save him.  It is marvellous – Mahyian, in fact - the way that the story uses commonplace things to suggest supernatural menace and danger: the feel of wool and the smell of peppermint. Even Laura’s homework reflects her feelings: “time divided by fear multiplied by imagination and so on.”

The skilful use of references to folk tales and fairy stories is another powerful aspect of The Changeover. Laura thinks of Red Riding Hood and the wolf when she sees Sorry Carlisle, while poor Jacko, his vitality being drained away, says, “I don’t like it. Fox eat up gingerbread boy.” Sleeping Beauty, Bluebeard, the looking glass, Oz, the wicked wolf, the spider’s parlour, and the three bears are conjured up throughout the story. All this timeless evocation is happening in a raw new subdivision in a city which is recognisably Christchurch; the ability to meld the mythical and mundane so seamlessly is all part of the Mahy word magic.


“Ancient symbols are committed to modern wires,” is how Laura puts it when Sorry’s grandmother swears an oath over the telephone. (In 1984 phones needed copper wires.) And so the battle between Braque and Laura, which began so simply with a stamp, becomes an all-consuming crusade which changes Laura forever.