(This is the press release from the NZ Booksellers Association, 15 Aug 2017.)


'Rich imagery, with compelling storytelling. It draws readers into the tale of Lewis Carroll’s poetry like never before,' say the judges of the winner of this year’s Margaret Mahy Book of the Year Award in the prestigious New Zealand Book Awards for Children and Young Adults. Snark: Being a true history of the expedition that discovered the Snark and the Jabberwock . . . and its tragic aftermath also wins the Russell Clark Award for Illustration. Written and illustrated by Port Chalmers resident David Elliot, Snark is published by Otago University Press. 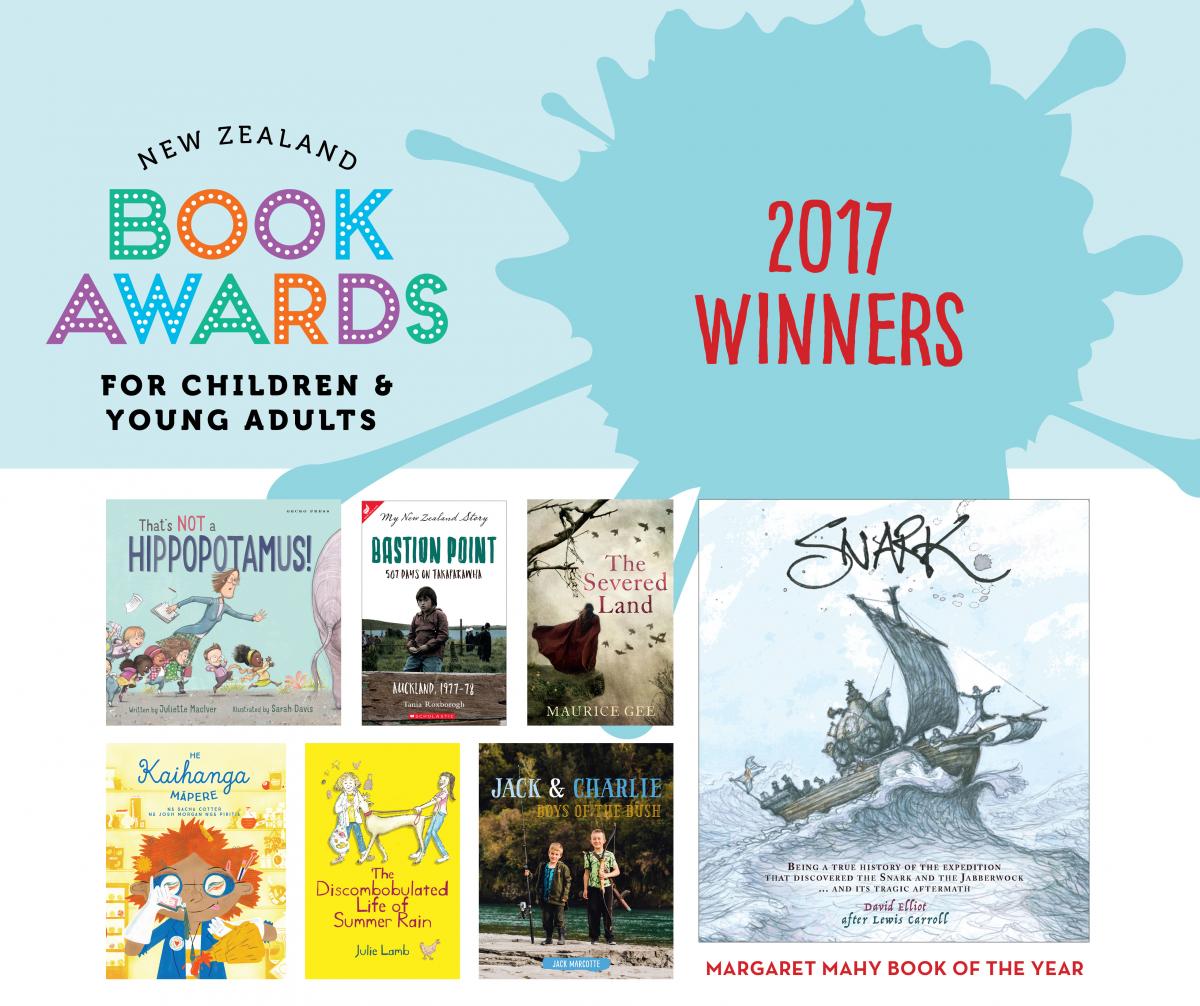 Pam Jones, convenor of the judging panel, says, 'Like Russell Clark, David Elliot has a clear wit that pervades his sketches. His draughtmanship is outstanding. However, it’s the cohesive way he has combined all elements of this book that won the judges over. David Elliot’s twist on Lewis Carroll’s nonsense poems is unique, and offers everything the reader could want – mystery, adventure and intrigue.'
The winners of the 2017 New Zealand Book Awards for Children and Young Adults were announced at a ceremony on the evening of Monday, 14 August in Wellington. The awards are a unique celebration of the contribution New Zealand’s children’s authors and illustrators make to build national identity and cultural heritage.
The judging panel for the 2017 New Zealand Book Awards for Children and Young Adults comprises children and young adults librarian, Pam Jones (convenor); education lecturer, Trish Brooking; author Ben Brown; reviewer and promoter of New Zealand children’s literature, Sarah Forster; and WORD Christchurch programme director and author, Rachael King. For the second year, the panel is joined by English academic, Professor Martin Salisbury, who is the advisor for the Russell Clark Award for Illustration.
The te reo Māori entries were judged by University of Auckland Kaitaiki Māori librarian, Riki-Lee Saua (convenor); Anahera Morehu, Library Manager Arts, Māori, and Pasifika Services at the University of Auckland Libraries and Learning Services; Principal Librarian Children’s and Young Adult Services at the HB Williams Memorial Library, Gisborne, Te Rangi Rangi Tangohau; and Rongo Waerea, the Māori Services Librarian at Auckland’s Otara Library.
The Picture Book Award winner is Juliette MacIver and illustrator Sarah Davis with That’s Not a Hippopotamus! “From beginning to end, this rambunctious picture book does not miss a beat. The illustrations are complex and clever. What made this book stand out for us were the diverse cultures depicted in the illustrations,” comment the judges.
Canterbury author Tania Roxborogh wins the Esther Glen Award for Junior Fiction with My New Zealand Story: Bastion Point. Tania Roxborogh applies a deft and sensitive touch to this book, say the judges.  “Race relations in the 1970s are revealed to the reader through the eyes and heart of a young Maori girl wondering what is wrong with the grown-up world around her. Here the true craft of Tania Roxborogh’s writing is revealed. We can wonder with her.”
Maurice Gee wins the Copyright Licensing NZ Award for Young Adult Fiction with The Severed Land. “We knew we were in good hands as Maurice Gee’s elegant writing carried us along on an epic and archetypal adventure of warring families, colonialism, mysterious strangers and making allies out of enemies. Not a word is wasted in this taut, thrilling, often brutal and morally complex tale,” explain the judges.
Father and son Josh James Marcotte and Jack Marcotte win the Elsie Locke Award for Non-Fiction with Jack and Charlie: Boys of the bush. The book provides vivid insights, from a child’s perspective, into the daily rhythms of life on the remote West Coast of the South Island. “The exceptionally vivid photography invites high levels of engagement and scrutiny. This book is a fine example of a non-fiction text that has cohesion, charm, and a capacity to captivate both children and older readers.”
The Te Kura Pounamu Award for the best book in te reo Māori is won by Sacha Cotter for Te Kaihanga Māpere, translated by Kawata Teepa and illustrated by Josh Morgan. The judges felt this book stood out not only for the excellent quality of Māori translation, but also for an inspiring storyline which celebrates a favourite Kiwi pastime and encourages young readers to follow their dreams and persevere in all they do.
The Best First Book Award winner is Julie Lamb for The Discombobulated Life of Summer Rain. The judges hope that this book marks the beginning of a long career in children’s writing for this author. “The limitless boundaries of friendship and family are explored, and the plot is expertly woven.”

The full list of winners of the 2017 New Zealand Book Awards for Children and Young Adults is:
Margaret Mahy Book of the Year (prize: $7,500) and winner of the Russell Clark Award for Illustration (prize: $7,500)
Snark Being a true history of the expedition that discovered the Snark and the Jabberwock . . . and its tragic aftermath illustrated and written (after Lewis Carroll) by David Elliot; Otago University Press
Picture Book Award: Prize $7,500
That’s Not a Hippopotamus! by Juliette MacIver and illustrated by Sarah Davis; Gecko Press
Esther Glen Award for Junior Fiction: Prize $7,500
My New Zealand Story: Bastion Point by Tania Roxborogh; Scholastic New Zealand
Copyright Licensing NZ Award for Young Adult Fiction: $7,500
The Severed Land by Maurice Gee; Penguin Random House (Penguin)
Elsie Locke Award for Non-Fiction: Prize $7,500
Jack and Charlie: Boys of the bush by Jack Marcotte and Josh James Marcotte; Penguin Random House (Puffin)
Te Kura Pounamu Award for the best book in Te Reo Māori: Prize $7,500
Te Kaihanga Māpere by Sacha Cotter, translated by Kawata Teepa and illustrated by Josh Morgan; Huia Publishers
Best First Book Award: Prize $2,000
The Discombobulated Life of Summer Rain by Julie Lamb; Mākaro Press (Submarine)
'This year’s winners have produced rich, evocative and engaging books. In these titles we have a platter of delicious reads that celebrate our unique New Zealand culture and showcase delightful characters who will entertain a wide spectrum of readers and non-readers alike. Much praise must also go to the publishers of some truly beautiful editions that will undoubtedly enhance the readers' experience, in a way the e-book versions never could. New Zealand children and young adult publishing is in good heart,' concludes Pam Jones.
An integral part of the New Zealand Book Awards for Children and Young Adults is the HELL Reading Challenge, now in its fourth year. Children are encouraged to read all the finalists’ titles through their schools or local library and are rewarded with free pizza. So far this year, 212,000 pizza wheels have been distributed.
The New Zealand Book Awards for Children and Young Adults are made possible through the generosity, commitment and vision of funders and sponsors: Creative New Zealand, HELL Pizza, Book Tokens (NZ) Ltd, Copyright Licensing NZ Ltd, LIANZA, Wellington City Council and Nielsen Book. The awards are administered for the New Zealand Book Awards Trust by the New Zealand Book Council.
Posted by Trevor Agnew at 23:38