Joy Cowley published her first novel, Nest in a Falling Tree, in 1967.  Since then she has published hundreds of novels, picture books and readers. Here is an interview she gave in December 1998. It originally appeared in Magpies Magazine in March 1999.
Photo of Joy Cowley in action at Storylines, Christchurch, August 2010 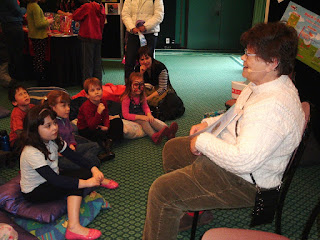 “She has French perfume and fine lace underwear, an Edwardian dress of yellow silk with mutton chop sleeves and tiny pearl buttons, a picture hat covered with veiling and gold silk roses, and she is riding through the town on a BSA 650 Gold Flash.” –Joy Cowley, The Machinery of Dreams, in Summer Book 2, Port Nicholson Press, 1983.


was born in 1936, five months after .  In the Asian zodiac’s twelve year cycle, this was the Year of the Rat, the beginning of a new era.  Certainly the Year of the Rat is an auspicious one for children’s writing.  Rat people (who are expected to be creative, inventive, gossipy, ambitious, lively and adaptable) include , , , , , , and .


Although amazingly busy, she is also amazingly helpful to others.  took time off during the Christmas holidays to answer ’s questions.


1.  I like that passage about the motorbike because of its very specific details.  In your writing, the descriptions of things like eel catching are often detailed.
Do you do this in order to convince readers?  Does it involve you in lots of research?  Or do you keep one of those mysterious notebooks?


Writers seem to work mainly one of two ways.  Some are auditory.  They write as though they are taking dictation.  Others, like me, are visual.  I spend a lot of time with plots and characters, expanding them, asking questions of them until I know them so well that I can see the details.  Writing, then, is simply a matter of describing what I can see in my mind.


I like reading stories with specific detail.  I think that it is detail which connects with our own experiences and hooks us into a story.  I also try to be selective with description, using it for pacing, for light and shade in a work, and for general leitmotif effect.


Do I keep a notebook?  Yes.  New ideas will gatecrash a work in progress, and without consideration or respect, yell, “Look at me!  Look at me!”  I have found that the most effective way of getting rid of them is to jot them down in my notebook.  The idea might still be active a year later but then again, they might be dead.  It doesn’t matter.  My notebook serves as a clearing station for intrusive material rather than a source of inspiration.


2.     Is humour an important part of your writing/story-telling?  I notice the almost slapstick humour of much of your writing, like Starbright’s taking a solo bungy jump without working out how to untie her feet in ‘Starbright and the Dream Eater’.   How do you feel humour should be used in writing?  Especially writing for children?


You bet!  It is an important part of life.  Yet few writers take humour seriously!  I am appalled at the lack of humour inmost of my early adult short stories and novels.  I can only say that I am glad these works were aimed at adult readers who have choices, and not young people.  In real life the masks of comedy and tragedy are rarely far apart.


It sounds flip to say “the darker the shadow, the brighter the light” but life really is a oneness and the balance seems always there.  Some of the funniest things happen at funerals.  That is the wholeness of being.  Look at ’s book Angela’s Ashes.  But, for some reason, most writers for young readers tend to focus on problems in a humourless way that presents an incomplete picture.


3.     Does the humour sometimes conceal pain?  The joke about cutting off fingers in ‘Gladly Here I Come’ made me wonder.   Is black humour an effective tool for your style of writing?


I am not aware of using “black” humour or employing humour to cover pain.  I simply try to reflect the world I live in.  At the same time I am very aware of laughter as therapy, especially for children whose authority is not always recognised in an adult world.


Humour has been an important ingredient in my early reading books.  These stories began in the 1960s, when I was working with my son and then other children who could not read.  Many were arbitrarily labelled dyslexic but I noticed that their right/left confusion and disability did not extend to those activities they enjoyed.  Most had simply “switched off” learning to read, unwilling to put themselves at risk of further failure.  Their body language was explicit of a frozen attitude to the printed word.


These children taught me that early reading materials need to be easy, exciting, meaningful.  They taught me that an engaging story was important, even at the lowest levels, and they showed me that no one can be tense while they are laughing.  With the all-important humour, there developed a tendency to put a twist at the end of a story.  This was a bit like pudding after vegetables.  It encouraged a child to read to the end of the book.


4.  Do you have anyone in mind when you write?  In other words, do you write for a particular, person, audience, reader, when you are working on something?


Not any one person.  I am keenly aware of the age and reading level of my intended audience and this awareness tempers my writing.


For beginner readers, the focus is the acquisition of reading skills.  This means a very simple graded text with much of the plot detail going into the illustrations, so the page-by-page notes to the illustrator are very important, especially if the illustrator has not had a lot of experience in working at this level.


Books for fluent readers have more language content and here is where I try to push the limits in expanding a young person’s awareness of the richness of the English language and ways in which it may be used.  (“Once upon a mousetime, two little squeaks went cheesing...”)


It is always a delight to find that teachers have used the book as a springboard for the student’s own creative writing.


5. The spiritual as a part of everyday life seems a regular theme in your work.  I am thinking of the mussels on p.24 of ‘Bow down ’ or the trees in ‘Gladly Here I Come’.  Then there’s your hymn “Sacrament of the Seasons” (No 77 in ‘Alleluia Aotearoa’) “ comes to me as a springtime tree…”


Your characters even discuss religion, and have spiritual beliefs (e.g. ‘Starbright and the Dream Eater’).  What are your views on the mysterious behind the mundane?


What is mundane?  Everything has a particular beauty.  Everything is a facet of the mysterious.


I have always known an “otherness”.  Most children have that knowing.  I am sure they bring it into the world with them.  For me, at a young age, the knowing had simple self-evident truths: that everything was connected to everything else; that good and bad described how we thought about things and not the things themselves; that there was no such event as death – things simply turned into other things.


There was also a strong sense of another greater reality somewhere very close.  It was as though this life was a dream and I was very close to wakening.  I remember that as a young child I felt very old.  Not just parent-old or grandparent-old, but as old as a mountain.  I have spoken with many children who have the same feelings.


Naturally, when I was young, I tried to place these feelings where they could be affirmed, but there was no explanation for them in the religious or scientific beliefs of my childhood.  My views earned me beatings from my mother who believed the devil was in me.  (My parents were fundamentalist Christian and their divided world always seemed alien to me.)


These days there have been huge shifts in spiritual awareness as people discover the metaphysical outside of the old religious structures.  Part of this shift is supported by new physics and by the sudden expansion of knowledge that has come with micro-chip technology.  But we still tend to talk to children about religion in demeaning and meaningless ways, which are remote from their own spiritual experiences.  So, yes, I do write about child-centred spiritual experience.  I believe it is not separate from other life experience, merely an extension of it.

6. I was interested in your views on fantasy in the Introduction of ‘Beyond the River’,  where you wrote, “Since the beginnings of communication, people have used fantasy to express truths which could not be contained in a factual account.”  Are you myth-making for the 20th Century?  Are you entering a new science fiction–fantasy field with ‘Starbright and the Dream Eater’ and ‘Ticket to the Sky Dance’?


I don’t see myself as myth-making for the 20th Century, although I am aware that I belong with a number of writers who are exploring myth.  The stories in Beyond the River were largely inspired by the New Zealand landscape which seems to dictate ongoing legend.


Starbright and the Dream Eater and Ticket to the Sky Dance were inspired by quantum physics, and they did involve a bit of research.


Fantasy is not apart from reality.  It is reality pushed to the edge, and it must work logically.  Fantasy should always be real to the reader.  I like to read science fiction but am disappointed when plots are illogical or when they rely heavily on coincidence.


7. What are your views on settings of children’s fiction?  Your New Zealand settings and descriptions in e.g. ‘Gladly Here I Come’ are very sharp, right down to, say, the smell of eels.  There seems to be an American setting in ‘Starbright and the Dream Eater’.  Was this your idea, or the publisher’s idea?


In early reading books, much of the story is contained in the illustrations and I need to write full illustration briefs f


for each page.  Both the illustrator and I are under the same constraints.  We are helping the child to learn to read.  But when I write picture book texts for established readers, I do not dictate to the illustrator in any way.  Rather, I view the illustrator as a co-author who can expand my original idea into something much bigger and better.

14.  Did you ever get that motorbike?  When I first asked you that, in Winton in 1984, you were still rueful about the Royal Enfield 147cc your dad had bought you, thirty years earlier.

No.  The year after my father bought me the miserable little Royal Enfield (aye, but he was a canny man) I discovered a new interest which consumed every penny I could earn.  The spluttering bike became a means of transport to the Middle Districts Aero Club at Palmerston North, where I fluttered over the city doing circuits and bumps in Tiger Moths.  Like Toad, my passion changed overnight and two wheels on the ground could not compete with a love affair with flying.


Marriage and children soon grounded me but, even now, I ache at the sight of an old DH-82.  I am filled with nostalgia for a contraption of wood, wire and canvas, with a 48 mph cruising speed, just fast enough to whistle the wind under your goggles, slow enough to fill the open cockpit with smoke from the crematorium.

But I should add that there is a postscript to the motorbike era.  My son James has a beautiful Harley, which I may occasionally ride.
December 1998