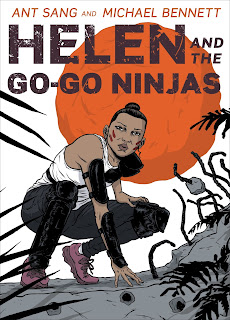 
Helen is a young woman, living in present day Auckland, whose concern with threats to the environment accidentally disrupts a biological research demonstration by her boyfriend Marion. Suddenly Helen is kidnapped by two female warriors from the future – the Go-Go Ninjas of the title – and swept off three centuries into the future. The world of 2355 is what remains after the destruction caused by global warming, wars, famine and floods.


In the first of several very good black jokes, Helen is called “world-wrecker” and is told that the devastation is all her fault. The ninjas, unaware that Marion can also be a boy’s name (if your mum is a John Wayne fan) have kidnapped the wrong person.


Along with Helen, we learn how Marion’s development of paramecia “peace balls” to create new ways of healing and communicating led to the near-extinction of the human race.  The peace balls - the red blob menacing Helen on the cover is one of them - destroy people's ability to think and communicate. Only three groups of humans now live in what used to be Auckland. The mindless Tree People are the slaves of The Riders who use a mixture of technology and cult theology to survive.  The third group, of course, are the Go-Go Ninjas who survive in Little Tokio, an underground shelter, where they have created a culture based on a few 1950s films which survived. The jokes about Bruce Lee and Go-Go dancing are a recurring feature of the story.


Helen, quickly adjusting to her new situation, realises that the only way forward is to make another time-jump and help kidnap the right Marion. Needless to say, more complications follow, ensuring a fast-paced action story with several surprises and, unusually in a dystopian story, a reasonably happy ending


This graphic novel was originally conceived as a film script by Michael Bennett and it has the tightly-connected plot and well-constructed surprise twists of a good action film. At the same time Ant Sang’s illustrations bring an imaginary world into being, with convincing detail and skilfully shifting viewpoints. As soon as you have read this book, you immediately turn back to page 1 and start through again, this time appreciating the carefully planned structure and the careful placing of tiny hints (such as Helen’s cold) which will be significant later.


Ant Sang’s artwork (which has had some colouring assistance from Kiwi comic creators such as Adrian Kinnaird and Dylan Horrocks) is beautifully matched with the story and dialogue, making each sequence a tiny drama in itself. For example when Helen is draping an illegal protest banner from the Sky Tower, a drowsy security guard fails to spot her on the outer balcony. Then he thinks she’s going to jump. “Miss, don’t do it. …You’ve got your whole life ahead of you.” She slips but grabs on to the banner, “STOP GLOBAL WARMING.”


Such ironies, quirks of human behaviour and razor-sharp storytelling, as well as the ability to project some social issues of the present into the future, make Helen and the Go-Go Ninjas a winning graphic novel.


Ant Sang has an interesting website showing stages in the development of the illustrations, beginning  at http://www.antsang.co.nz/241-2/