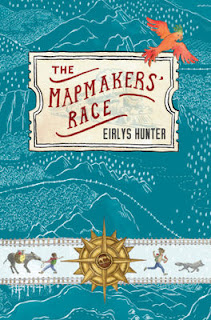 Reviewed by Trevor Agnew
Books with maps have always been among my favourites, from Tolkien to Ransome, from the Hundred Acre Wood to Moomin Valley.  I have also long enjoyed children’s books where irritating parents were got out of the way early on. The Mapmakers’ Race has a map for every chapter and right at the beginning Ma Santander misses the train, and so her four children have to compete in the titular race by themselves.  The result is a thoroughly enjoyable adventure, with plenty of action and humour.


The Race is a contest for teams of surveyors and cartographers to lay out the best route for a proposed railway from Grand Prospect to Coalhaven. (We are in a steam-age fantasy world, where coal is vital.) The prizes total 3,500 guineas, so a remarkable range of well equipped (and sometimes unscrupulous) teams have entered.


Penniless and suddenly parentless, the four young Santanders have to improvise. Fortunately each member of the family has talents which will be useful in their quest.   Sal (14) is the sensible one with a good grasp of mathematics and surveying. Twins Joe and Francie (11) are strongly bonded. Francie doesn’t talk but Joe speaks for them both. Joe never gets lost, a handy skill for an explorer, while Francie, the cartographer, has an amazing talent which readers will enjoy learning about. Even young Humph and the family pet, Carrot the Parrot, are able to contribute. The Santander family are indeed a team; each of them has an ability that helps them towards their goal of making the perfect map.


Since they have to survive in the wilderness for four weeks, they are lucky to have the help of a slow-speaking local lad, Becket, a red-headed beanpole, who is a master of many practical skills; he can fish, hunt and cook. He’s also a dab hand at storytelling.


Can five children and a parrot head off half a dozen other teams, including the unscrupulous Roger’s Ruffians and the self-confident Monty’s Mountaineers (who are all mounted on mechanical horses)?
Of course it is the down-to-earth Beckett who points out that the other teams are also all “pompous asses.”


As well as being obtuse, the opposing teams are often funny. The scientists, of the SOLEM team (Society of Logical Explorers, Mappers and Navigators), for example, speak in such technical jargon that Sal has to translate what they say.
“The outcome was an inadequately nutritious calorific supply.”
“They didn’t take enough food,” Sal explained to Humph.


In fact, Eirlys Hunter’s dialogue is always enjoyable and often amusing:
“What about the wolves?’
“High mountains.”
“Extreme weather conditions.”
“Nothing to worry about then,” they said together.


Illustrator Kirsten Slade has provided lively pictures and has also created a strip-map to give readers a bird’s-eye-view of each part of the dramatic landscape encountered by the Santander family.


The story trots along at a cracking pace. Bears and wolves and several other creatures make their appearance, the villains are villainous, there are plenty of jeopardies and the conclusion is very pleasing. Through it all, the Santanders are resourceful.


Humph gets the whole mood of this satisfying story in one sentence:
“I like being a venturing boy.”
“I do too,” said Joe.