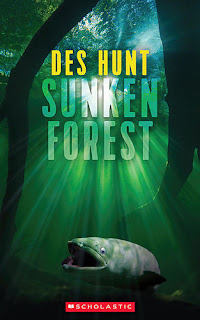 
Given that New Zealand’s longfin eels can live for a century and grow to a length of two metres, it was a certainty that Des Hunt would one day write a novel with an eel as the hero. Or in this case, heroine. Elsa is the name young Matt gives to the queen-sized eel he encounters in Lake Waikaremoana. (Matt reads widely and has definitely been influenced by reading Born Free.)


“Waikaremoana is not a lake to be messed with,” warns a fisherman and Matt would be the first to agree with him.


Matt doesn’t want to be there, but he has been sent to this tightly-run wilderness camp because of his tainted reputation at his new school. Already suspected of theft, Matt has fallen in with bad company in the form of Cam and Jay. At the adventure camp at Lake Waikaremoana, which is run on semi-military lines by Mr Klineck, Matt is suspected of further misdemeanours. (It is interesting that Matt finds some literary comfort in comparing himself to the falsely-accused David Balfour in Kidnapped.)


He strikes up an odd companionship with the bookish Paul and comes a little closer to understanding girls like Azura and Maddy. When one of Cam’s vicious tricks has serious consequences for the group members, they begin plotting revenge but a natural disaster puts many lives at risk.


As always Des Hunt provides a strong element of science – in this case geology – but he also raises moral issues which will be important to his young readers. Matt’s reputation is repeatedly slurred by a caller on talk-back radio, and the powerful influence of social media on opinion is well shown. The harmful power of peer pressure and gossip is also sharply depicted. Words can wound and leave scars.
There is also a strong moral issue. Are Matt and his friends seeking justice or do they just want revenge? The matter is well debated in a lively and satisfying adventure that manages to bring together unrelated events from decades earlier, and produce a satisfying conclusion, featuring the monster eel as a key player.  As Matt reflects, “Lions were animals that scare people… Eels were much the same, scary in form with a bad reputation.”


Sunken Forest may indeed give us all a better appreciation of eels.