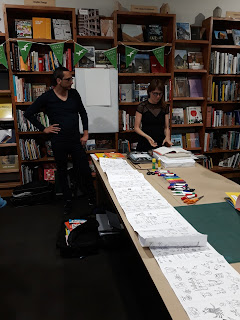 
Visiting children’s book artists always have the difficulty of trying to address two groups – the children who read their books and the adults who buy them. Touring French picture book artists Eric Veillé and Clotilde Perrin dealt with the problem with Gallic aplomb. Their first Christchurch session was held in the book palace known locally as Scorpio Books. A wide range of felt pens and paper had been provided to enable enthusiastic children to be initiated into the craft of picture-book making.
Unfortunately no Christchurch children had made it to the central city venue by the starting time of 3.30 pm.  Undaunted Clotilde and Eric dragooned a large contingent of teachers, librarians, booklovers and grandparents – some qualifying for inclusion in several of these categories – to take up their pens and have a go.


Both artists showed the draft illustrations they had used in beginning two of their recent books Eric’s Encyclopedia of Grannies and Clotilde’s Inside the Villains (both published in NZ by Gecko Press). Clotilde showed how she prepared her pictures, complete with carefully designed flaps and openings, as maquettes (preliminary sketches).


Eric displayed a huge array of pictures of Grannies and explained that he drew them with a felt pen, scanned them into his computer and then chose the ones he likes best. Colouring follows. Asked how he chooses them, Eric replied, ‘Sometimes, I know that it is a good picture, when it makes me laugh. I laugh out loud as I am drawing it.’ 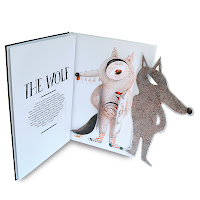 Using an easel, the pair took it in turns to create a picture, inviting their ‘students’ to follow suit on their sheets of paper. Clotilde began by drawing an eye which rapidly became part of a furry head and finally turned into the hungry wolf, the villain occupying the cover of her book. Clotilde’s brushwork was quick and confident and soon she had used watercolour to create a thoroughly convincing wolf.


Eric then showed how to draw a Grannie. Even though his illustration was quite small, his ‘students’ produced reasonable copies. 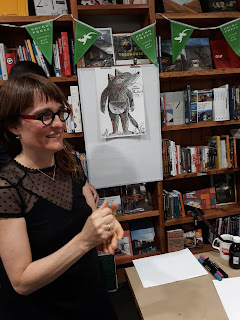 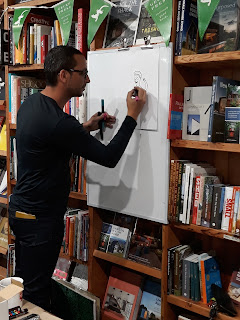 Then came the surprise. Clotilde used a Stanley knife to make a semi-circular cut in the wolf’s belly, following which she glued Eric’s Grannie picture on the back of her wolf picture. Finally, she lifted the flap to reveal Grannie inside the wolf’s stomach. It was a lovely moment of revelation when we could all appreciate their combination of skill and imagination.


Later Eric added a highly ambiguous speech balloon for the wolf, ‘I love the Grannies of Christchurch city.’ 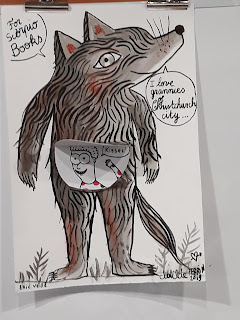