A Place of Stone and Darkness

A Place of Stone and Darkness 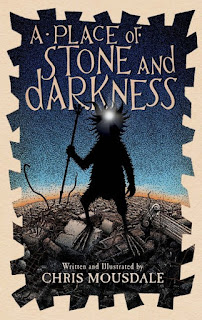 
In A Place of Stone and Darkness, Chris Mousdale has created not one but two worlds, each with their own unique civilisation, language, customs and technology. Already an award-winning illustrator, Mousdale now demonstrates his skill as a storyteller by describing the consequences of these two races encountering (or rather re-encountering) each other. Surprisingly the first dramatic meeting takes place underground.


An adventurous young cave explorer, Ellee Meddo, is investigating a secret cavern created long ago by her ancestors. Accidentally plunging into a deep well system, Ellee risks her life to save and resuscitate a half-drowned boy. When the narrative viewpoint moves to the boy, as he regains consciousness, we find that he believes a strange feathered creature is jumping up and down on his chest.


A Prologue explains that thousands of generations earlier, a newly arrived group, the Toppas, had arrived and slaughtered almost all species of birds. One group, the flightless Striggs saved themselves by the desperate measure of moving underground and hiding in caves. Evolution produced a highly specialised civilisation with the skills needed to survive underground, far away from the murderous Toppas.


On page 6, a picture gallery of the main characters shows the Stiggs, all looking like tall intellectual parrots who have developed digits at their wingtips. Sidfred is Ellee’s inventive brother, while Kass is an eager young organiser, impatient with the more cautious, older leaders.


The reader now understands that Ellee, of course, is a Strigg, one of the evolved birds. The boy she has just saved from drowning, is a Toppa from the terrifying world of Uptop, a young human named Blue.


Over the years bits of Uptop technology have ‘found their way’ underground and been preserved in the Merzeum (Museum) sometimes with amusing results. (A gramophone and clockwork technology both play a significant part in this story.) Because he is fascinated by Toppa technology, Sidfred has mastered the Toppa language and, therefore, he can communicate with Blue.


Unfortunately Blue is still suffering from shock and can’t recall much. This means that the Striggs (and the readers) learn only gradually a little about the Toppas and the current situation in Uptop.


Pollution from the surface is contaminating the Striggs’ water supplies, killing their crops of morra (mushrooms) and harming their health. When Blue’s presence is revealed to them, the leaders are faced with a terrible dilemma.  On one wing, they feel they cannot kill Blue but, on the other wing, if Blue returns to Uptop, it seems certain that he will tell of the birds living underground. Then the Toppas will come down and slaughter them all.


With time running out, Ellee, Sidfred, Kass and a slowly recovering Blue mount an expedition. They will try to ascend the dangerous well-shaft, to reconnoitre the surface and report back.


What the four find on their arduous quest is a dramatic surprise and makes the second part of this novel an even more exciting adventure.


A high level of imagination has gone into creating the Strigg world, complete with its customs, ceremonies, religious observances, songs and mythology. Their language and figures of speech are skilfully created, so that they make perfect sense. Striggs don’t tell their visitors to sit; they say, ‘Take a perch.’ There are even sayings, such as ‘Busy Striggs have their wings full.’


Mousdale has also made full use of his illustration skills, by providing intricate endpaper cave-maps, and a selection of coloured illustrations as well as two more maps (not a spoiler). The splendidly dramatic cover picture, which shows Ellee as an alarming silhouette, gives us a good idea of Blue’s view of the Strigg world.


Well designed and beautifully presented, A Place of Stone and Darkness is a strikingly fresh and enjoyable novel, unpredictable and constantly surprising.


Note: Bright readers will have worked out the heritage of the Striggs by their distinctive dancing customs. An extra hint is that the scientific name of New Zealand’s Kakapo parrot is Strigops habroptilus.

Labels: 2019, A Place of Stone and Darkness, Chris Mousdale