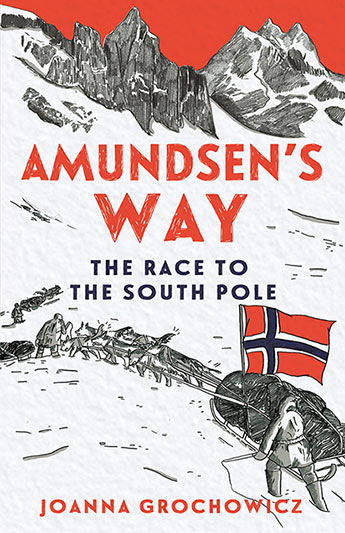 
This book begins dramatically with a scruffy figure in a filthy old cap and ancient blue jersey striding into a hotel in Tasmania in 1912. It is Roald Amundsen, back from his conquest of the South Pole and desperately seeking his first hot bath for months. Bath-time over, he sends a telegram that the world has been waiting for: the South Pole has been conquered.


With the success of Into the White, her moving account of Robert Scott’s exploits, it was only logical that polar exploration expert Joanna Grochowicz would write her next book of ‘narrative non-fiction’ about the Norwegian expedition which beat Scott’s team to the Pole. Amundsen was a dedicated professional polar explorer and his life story is fascinating, dramatic and often controversial.


Written in the present tense, Amundsen’s Way maintains a mood of excitement tempered with a concern for the unknown dangers. Grochowicz has confined the main narrative of the book to Amundsen’s arduous journey to the South Pole, inserting flashbacks to his key experiences in polar exploration, in order to show how he developed his guiding principles.


Amundsen’s steely personality and his methods of leadership are well shown. ‘Roald is very good at convincing people to do the things he wants them to do.’


I have read many accounts of exploration written for young people but never one with such skilful writing and well-developed structure as Amundsen’s Way. The dramatic team-briefing meeting, where Amundsen reveals to his team that their goal is not the Arctic but the Antarctic, is particularly well brought to life.  Amundsen has lied about his plans to his backers, to Nansen, to the Norwegian Parliament, and even to the King of Norway. He has also mortgaged his own property, so that personal and professional ruin will follow if his attempt at reaching the South Pole fails. The notorious telegram to Scott in Christchurch, ‘BEG INFORM YOU FRAM PROCEEDING ANTARCTICA AMUNDSEN’, is sent and triggers a controversy over ‘the race to the pole’, an issue which is handled with fairness and moderation here. We even have the scene where Amundsen had earlier hidden under his desk to avoid the embarrassment of meeting Scott.


Grochowicz’s research in Norway involved not only visiting the famous Fram but also reading the unpublished memoirs of many of the expedition members. The result is a lively and convincing portrayal of the interactions and tensions between the individual team members. Their gruelling and sometimes gruesome work-load is well depicted.  We also learn rather more about their bodily ailments than some might wish.


The hard-driven sledge-dogs also emerge as personalities (particularly the pup Madeiro, rescued by the Fram’s Captain Nilsen), although there should be a warning for readers who are over-sentimental about canines.  42 dogs set out for the Pole and only a dozen returned for reasons which are described in sometimes alarming detail.


Illustrations and maps are included but they have been poorly done so that every young reader will realise they could do better ones. In other words, it’s the words that matter here. And the words are great (Except when Amundsen says, ‘Okay.’).


Amundsen’s Way is a thoroughly enjoyable and readable story about some very brave people coping with horrific challenges.  It is ideal for making YA readers aware of the pleasures of long-form non-fiction books. Even better, her Acknowledgements section makes it clear that Joanna Grochowicz has plans for further writing, so we can look forward to more books like this one.