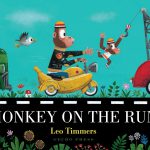 
These four Gecko titles arrived for review in July 2019. I always enjoy the arrival of books from Julia Marshall’s Gecko Press, because each one is a surprise. These four really surprised because they interacted with each other and got me thinking about some big issues. But they also amused me and gave me hope for the young people who read them. Bear with me and you’ll see why I think children’s books are so important.


Monkey on the Run is a joyous story told entirely in pictures. This makes it a skilfully-laid trap for all those who think they don’t like reading. The plot begins when a father monkey with a motorbike collects his son from school and rides off with him in his banana-shaped sidecar. They drive off down a busy street. That’s the start. The story ends when the pair arrive home, with the young monkey clutching a gift for his mother.  What is it? Where did he get it from? Back to the beginning we go and follow the young monkey’s adventures as he leaps from one vehicle to another.


Leo Timmers delights in creating crazy cars which are entirely logical if you consider the unusual animals who are driving them. Of course the rabbits would have a fast food van, selling carrot burgers on the move. Naturally a bee taxi has a large hive. Why shouldn’t a rhino’s fire engine employ snakes to slurp drinks and then squirt mouthfuls on fires? Add a young monkey to the mix and the rip down the road becomes even more intriguing. What became of Dad’s ice-cream? Who is stealing dolls? And so it goes on, with all the delightful details inviting the readers to make up their own stories.


Readers of Leo Timmers’ car books probably don’t worry about traffic problems. I sometimes wonder when current concerns enter children’s books. The answer, of course,  is that they
have always been there. Three more of the latest Gecko Press books prove my point. 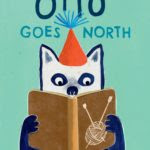 Take Otto Goes North as an example. The setting is ‘far up in the north’ of Sweden, where Lisa the lynx and Nils the little bear are getting their home ready for a visit by their friend Otto the lemur. ‘He’d been cycling for several months to get there. Maybe even years. A very long time in any case.’ They welcome Otto, who is entranced by the Northern Lights and sets out to paint them. Unfortunately the air is cold that Otto’s nose turns red and he can’t move his hands to paint.  ‘It’s hot where I come from,’ said Otto, ‘My fur isn’t like yours.’  Lisa and Nils put Otto into their sauna to recover, and puzzle out a solution to Otto’s problem. It would be a spoiler to say what they do but it is clever and involves sacrifice, the help of others and quite a bit of skill. Then comes the marvellous moment when they reveal their surprise to Otto. He is able to paint the aurora, and has not one but two marvellous souvenirs of his visit.


It’s a warm story with some amusing conversations, whimsical humour and charming colour illustrations by the author.  It’s only on reflection that we feel the full significance in today’s world of three animals, all with different fur, cheerfully playing board games by the fireplace. 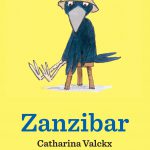 Zanzibar is a droll illustrated story about a French crow, whose imagination is triggered by a visit from a reporter (a lizard named Achille Leblab) who wants stories about ‘exceptional characters.’ Zanzibar suggests his singing might be exceptional. ‘CAW! CAW! CAW!’ Achille, however, is scornful about Zanzibar’s singing. Zanzibar would have liked to have been in the newspaper but now he realises, ‘I’m just ordinary. As ordinary as a crow can be.’ Then he has the bright idea of doing something so amazing that Achille will have to put him in the paper. To avoid spoilers, I won’t say what he does but it is very funny and he has to go to North Africa and make new friends in order to do it. (No spoilers here.) Unfortunately, Achille refuses to believe Zanzibar’s story but his friends do and they reassure him that he has always been remarkable. Through a twist of fate (and the help of another friend) Zanzibar finds that is far more important to keep in touch with friends and to make omelettes than to seek fame.


In an age of viral videos, there is a wonderful and warm message here for young readers. The author’s pictures are fun too. (Why omelettes? Because Zanzibar is a French crow, of course.)


Readers in the (roughly) 10 to 12 range will enjoy The Runaways by Ulf Stark, which can be seen simply as a funny account of a young boy helping his grandfather to escape from his hospital for a weekend. It is indeed funny and enjoyable (as all Stark’s books are) but it also has a bittersweet theme (as all Stark’s books do).


Gottfried likes his Grandpa but admits that he really is not a nice person. A former ship’s engineer, he swears at his nurses and complains. He is, as Dad puts it, ‘sick and angry and stubborn and crazy.’ Gottfried persists in visiting the old man (bringing him beer and herring sandwiches because Grandpa hates hospital food). He learns that his grandfather has unfinished business at his home. Perhaps because he takes after his Grandpa, Gottfried suggests running away. Surprisingly, Grandpa agrees. 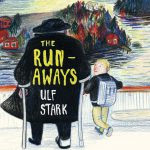 Craftily covering his tracks, so that his dentist father suspects nothing, Gottfried succeeds in getting the old man driven and ferried to his former home, a white cliff-top house, which he had built for his late wife. (An older friend, Adam, helps with the complexities of car driving, and plausible phone messages.) During the weekend they spend in the house, there are memories of Grandma everywhere, but Grandpa finds particular comfort in a jar of her lingonberry jam.


After ceremonially burning his suit (which reminds him of funerals) Grandpa allows Gottfried to take him back to the hospital. Grandpa promises that he will try to stop swearing so that he can surprise Grandma in heaven.  Gottfried is a perceptive narrator who can see past Grandpa’s bluster and understands why he puts a drop of jam into his water glass each day. ‘Grandpa got nicer and weaker with every week that passed.’   Gottfried is able to do one last favour for Grandpa before he dies.


‘Grandpa was pleased when we arrived. He put in his false teeth and smiled.’


The Runaways is a richly rewarding and unsentimental story, about three generations and their relationships and love for each other. The various conversations about life, duty, words, death, heaven and lingonberry jam are very amusing.


Best of all, Kitty Crowther’s colour illustrations are totally unsentimental and show Grandpa as an ugly, angry old man. Only a grandson could love him.


We are reading Ulf Stark in English because fourteen years ago, in 2005, Julia Marshall had the bright idea of publishing English translations of the best overseas books for young people. The book which gave her this idea was Can You Whistle, Johanna? which had been published in twenty languages but never in English. Julia Marshall translated it and that was the beginning of Gecko Press. Needless to say, that wonderful book was written by Ulf Stark.


Gecko Press is flourishing, and Can You Whistle, Johanna is still in print. Unfortunately Ulf Stark died two years ago from cancer but the great thing about authors is that their words live on. Especially if Gecko Press has anything to do with it.