The Clockill and the Thief

The Clockill and the Thief
Gareth Ward
Walker Books 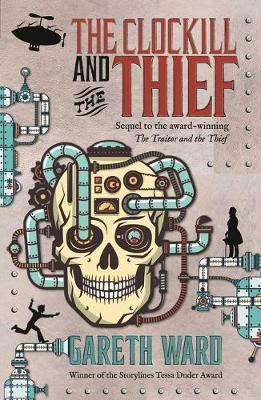 
‘In two weeks’ time, you will be crewing the Swordfish, the finest airship in the Empire.”
The success of The Traitor and the Thief (2018) has enabled Gareth Ward to produce a sequel. Ward’s first steam-punk escapade introduced the larcenous orphan lad, Sin, fleet-footed and light-fingered, who was recruited into the secret security force COG (Covert Operations Group) led by Major C. War threatens Europe unless the fiendish schemes of Britannia’s enemies without (and traitors within) are thwarted.
‘The sharp tick of spinning clockwork cut the air and, quick as a piston, the watchmek’s steamrifle was at its shoulder.’


As The Clockill and the Thief (2019) begins, Sin and his best friend Zonda are completing a COG training exercise which teaches them that death is a constant possibility in their world of secret missions, assassination and sabotage. While he can use his special skills to stay ahead of the robotic watchmeks, Sin has more difficulty coping with the hostile human beings he encounters.  The fanatically patriotic King’s Knights have injected Sin with a protoype blue blood, which makes him immune to poison, but also means that he is addicted and that his organs are failing. To add to Sin’s concerns, the fanatical Eldritch Moons has escaped and his plans for revenge include Sin’s murder.


The visit of Sultan Khan’s giant airship, the amazing Sky Palace, for the annual Heroes Ball seems a likely opportunity for some act of sabotage. Meanwhile, Sin and his mixed bag of classmates have their airship training to complete, thus facing a new range of what Zonda calls ‘near-death experiences’.


Gareth Ward’s inventive mind has produced a range of intricately-imagined steam-powered devices, such as submersible boats, steampistols, the NB88 rotary blunderbuss and submarines which are also capable of flight. Clockwork, however, is the driving force of the terrifying Clockill, a man whose brain and heart have been replaced by clockwork mechanisms and whose blood is cobalt blue. Sin may be able to outwit the other assassins but can he escape the Clockill?


Because almost everyone in the story has an ulterior motive, there are constant intricate plot twists. These make life difficult for Sin but entertaining for his readers. The Clockill and the Thief is rollicking fun, with plenty of hair’s breadth escapes and a whizzbang conclusion.

Labels: 2019, Gareth Ward, The Clockill and the Thief