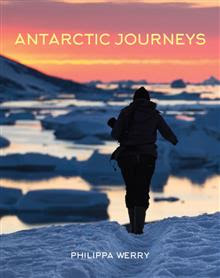 
Ignore the less than inspiring cover. Antarctic Journeys is a good book, ideal for introducing young readers to the Southern Continent.  Readable and well-illustrated, it conveys the grandeur and isolation of the Antarctic experience.


The theme of journeys works well. Philippa Werry begins with the journeys of the ‘heroic age’ of exploration, including several less well-known figures, such as de Gerlache, Borchgrevink and Shirase. Then she gives a completely different perspective by describing the various roles women have played in Antarctica. As well as scientists, the ‘Today’s Journeys’ segment also includes those who help preserve the historic structures.


“Antarctica is the only continent where the first structures built by humans are still standing.”


The complex issues surrounding visits by tourists and the changing climate are also discussed. Animal journeys introduce the area’s wildlife, ranging in size from krill to whale. Readers will learn about everything from the threat of king crabs to the easiest way to count penguins. (Happy Feet is here too.) Visiting animals include ships’ cats (Mrs Chippy) sledge dogs (Osman) and Scott’s luckless ponies.


I’ve always been fascinated by the South Pole. I grew up close to the spot above Port Chalmers where Kathleen Scott stood to wave farewell to the Terra Nova expedition (now marked by an elegant memorial). At school we often did projects on Scott, Shackleton and Amundsen, although my personal favourite was always Douglas Mawson. I was more deeply moved by the pony shooting sequence in the 1948 film Scott of the Antarctic than by John Mill’s death scene. I stood at Taieri Airport and watched the heavily-laden Operation Deep Freeze Globemasters and Constellations lurch into the air, with their jato (jet-assisted-take-off) bottles roaring. I relished Peter McIntyre’s display of his Antarctic paintings in Dunedin.


Now that I live in Christchurch I have easy access to the Antarctic Centre with its penguins and Canterbury Museum’s Antarctic display with Hillary’s tractor and a shiny-nosed bust of Amundsen.


I was even lucky enough to be shown through the headquarters of Antarctica NZ and see their stores of cold weather gear and the stunning artworks of the creative people who are chosen to visit and reflect on the Southern Continent. There are painters, poets and even dancers. Some of the best quotes in the book come from Margaret ‘Skidoo’ Mahy.


Philippa Werry (who has at least 15 books in print) was certainly an excellent person to send to Antarctica. She has the historian’s eye and the novelist’s ear. She’s also good with a camera. (You can read Philippa Werry’s diary of her time in Antarctica on:


Antarctic Journeys not only gave me a fine burst of nostalgia; it also brought me up to date with the daily rounds of the amazing range of people who work there.   It is good on the routines of everyday life at McMurdo Sound and gives a vivid insight into how Antarctica fascinates all those who go there.


It will also fascinate anyone who reads this book.