On the Brink Maria Gill

On the Brink:
New Zealand’s Most
Endangered Species (2019) 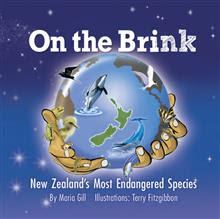 
What a useful book this is.


Maria Gill’s information books for young readers always give a clear, well-organised overview of their subject. ‘Endangered’ is a term that is used loosely, so young researchers often find it difficult to research endangered species because of the torrent of information that pours over them.


On the Brink takes the sensible approach of first defining terms and then looking at the ‘Top Five’ endangered birds, fish, marine mammals and insects.


Take the ‘Top Five Endangered Reptiles, Frogs and Bats’ as an example. They are a frog, two bats a gecko and a skink. For each one, we are given their full name: (Hamilton’s frog, Pepeketua, Leiopelma hamiltoni) as well as their size (37-47 mm), population estimate (300) and a map of their location (Stephens Island). A clever code gives more information. (NC, E means that Hamilton’s frog is endemic, nationally critical and in danger of immediate extinction.) Along with a handsome portrait (artwork by Terry Fitzgibbon, author of Coo-Coo Kereru) each animal has a half-page description of their habits and habitat.  (Guess who lives in moist rock crevices and hatches straight from the egg?) Then there is a rather grim list of things that menace the creature’s survival. As well as the usual suspects (rats, cats, ferrets, stoats) frogs have the added danger of the fungus that is killing frogs world-wide.
Reading this book, it seems amazing that these creatures have survived at all. Bats have to contend with sparrows, rats, mice and wasps at their roosting sites, as well as the routine threat of logging, fires and predators. There are only 200 to 300 Chesterfield skinks (NCE) living in a paddock bordering a sand dune near Hokitika and they are hunted by mice, rats, ferrets, cats, hedgehogs, weka and possums. (Yes, it’s being fenced.) The Muriwai gecko has the added threat of kingfishers and 4WD vehicles – and no fence.


Maria Gill always finds the perfect phrasing to help the reader visualise the animal. The body of a long-tailed bat is 5-6 cm, or ‘slightly larger than the size of an adult’s thumb,’ and it can travel at 60 kilometres per hour -‘that’s faster than your parents’ car when driving you to school.’


While species such as the fairy tern (45), kokopu (250) and Canterbury mudfish (unknown) are reasonably well known, some of the endangered animals listed are obscure. Insects such as the Mokohinau stag beetle, Tekapo ground weta, Te Paki stick insect, Alpine grasshopper and Forest ringlet butterfly simply don’t have the cuteness appeal of the kakapo (160) or Maui dolphin (55).


The text is supplemented by fact boxes, offering such gems as: ‘The Good News: Five birds that were once thought to be extinct have been found!’


The closing pages of Maria Gill’s books are always interesting and outward-directed and On the Brink is no exception. Here she has pointed out how much can be achieved by one person (such as Don Merton with the black robin) or by people working together (such as the children who campaigned against single-use plastic bags). She has included two pages of suggestions for ‘stamping out refuse waste’ and ‘planting for the planet,’ which young people can work on in their home, their garden or their community.


There is also a good list of websites which young conservationists will find useful. The Glossary uses admirably simple and clear language, e.g. ‘endemic: native, found nowhere else but that one country, indigenous.’


I particularly admire the Index, which uses sub-headings such as Fish, Predators and Reptiles to make research easier.


On the Brink is a lively and readable book which will inspire a new generation of enthusiastic Kiwis with sympathy for our endangered creatures and an awareness of how to do something about it.