Space Maps: Your Tour of the Universe

Oratia Books of Auckland is making a brave venture by publishing Space Maps: Your Tour of the 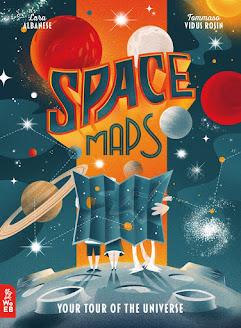 Universe. It is a large format book that lays out the entire universe for young readers. Originally published in Italian, it is now coming out in English and plucky Oratia are responsible for supplying this portion of the universe. They deserve good sales because the book is a pleasure to read.

Guided by a three-eyed alien, two young children are taken on a tour of our solar system, with all its planets and moons, as well as the galaxies surrounding it. Then they see what is known about deep space and the technology which allows us to glimpse it. The result is a mind-broadening series of revelations.

The author, Lara Albanese, has a flair for memorable phrases. Thus Venus is the ‘dazzling planet’ named after the Roman goddess of beauty.  Saturn is the Lord of the Rings and Uranus is the Sideways Planet. Asteroids are ‘an army of small stones’.

Of course, observers on Earth have all interpreted the heavens in terms of their own culture, so several pages are devoted to the various ways we have mapped the stars, including the Greek, Chinese and African viewpoints.  Thus the Pleiades appear on the European star map but they also turn up as the daughters of the sky god on the African map, which shows the star stories of the San people.

[The only slip in this book is that the love story of Princess Orihime and the shepherd Hikoboshi on page 13 is Japanese not Chinese.]

Space Maps uses a magnificent series of double page spreads to introduce such concepts as gravity, spiral galaxies, black holes, gas giants, ice giants, pulsars and colliding galaxies. The artist, Tomasso Vidus Rosen, has matched his striking illustrations and diagrams perfectly with the text. Fact boxes abound. The result is to make a mass of information clear and intelligible. This particularly applies to the section ‘What is Beyond our Solar System?’ where we share the insights modern technology has given us into deep space.

The aim is always to make things clear to a bright young reader. An ingenious example is Vidus Rosen’s use of a polar bear and a penguin to differentiate Earth’s north and south poles.