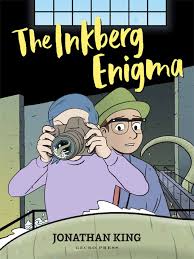 A. INTRODUCTION: Have you seen this trailer? It’s the best possible introduction to an exciting New Zealand graphic novel. (Our generation called them comics and we weren’t encouraged to read them. Of course our generation didn’t have communication screens in each house, that could link you to trailers like this. But we did have books. And comics.)

B. BRIEF REVIEW: Whew! Now that you’ve seen the trailer, you have to read The Inkberg Enigma. The Covid-19 pandemic delayed the publication of The Inkberg Enigma but it’s available at last. Buy it or borrow it from a Library, but do read it. It’s great.

The Inkberg Enigma is a comic book which gives young readers a gripping introduction to the genre of the graphic novel, with a story told in a vivid mix of words and pictures, each supporting the other.

The lively proactive main character is Artemisia, who prefers to be called Zia. (Since Queen Artemisia was a triumphant war-leader and naval commander, this is a marvellously appropriate name.)  Zia is the adventurous character in this story, and she has a hard job persuading Miro the book-worm to leave his collection of dubiously-acquired classics.

‘This is how you have adventures. You find cool things and you do them,’ Zia protests, ‘You don’t just read books about them.’

Miro would rather lie on the sofa and read books. In fact Miro’s enthusiasm for books is a key factor in the story, and a wide range of books and authors are name-tapped. For example, it is significant that copies of both Comet in Moominland and Twenty Thousand Leagues Under the Sea play a role in this story. Both of these books feature alarming tentacled creatures and the cover of The Inkberg Enigma shows several tantalising glimpses of tentacles.

The story develops with the pace of a good movie, reminding us that Jonathan King is also a successful film-maker. In the port of Aurora, the mysteriously successful fishing industry has a sinister secret, and Zia dragoons Miro into helping her investigate.  They soon find Mr Hunter, the mayor of Aurora, and others connected with the fishery, applying pressure.  Undeterred, they enter the fish processing works that evening  - in a creepy noir sequence - and witness a disturbing ceremony where pages of a book are sacrificed.

Gaining information from the Aurora Museum and Miro’s favourite bookshop, Zia and Miro realise that the mystery is connected to William Danforth who led a 1930s Antarctic expedition before founding the fishery that made Aurora wealthy. One dramatic picture shows his statue (decorated with tentacles).

What follows is an unexpected and exciting adventure. The quest culminates in a marvellously imaginative (and delightfully booky) concluding sequence including a full-page librarians’ nightmare of collapsing shelves and cascading books. There’s also a witty twist at the very conclusion of the story.

The dialogue is quick, clever and often amusing. When Zia rescues Miro from bullies, she recognises him from their primary school days.

‘I saved you from getting beaten up then too, didn’t I?’

‘I think you were the one beating me up, actually,’ says Miro.

Jonathan King’s handsome colour illustrations (which were drawn by hand in Clip Studio on an iPad Pro) contain a nice combination of the familiar and the eerie. The colours are carefully chosen, flat and muted, while, in a clever touch, the historical flash-back scenes (of the 1930s Antarctic expedition’s disturbing discoveries) are drawn in black-and-white.

The harbour map on the endpapers has the same mix of the familiar and the strange as the rest of the book, although those who know Te Whakaraupo (in Canterbury) and The Camp (in Otago) will find familiar echoes.

Jonathan King gives subtle nods to his artistic influences throughout The Inkberg Enigma. For example, he has used the names of some artists he admires in the map. At one point Miro unwittingly sells Salvador Dali’s diving helmet to an antique dealer, who already has Citizen Kane’s sledge, Rosebud, hanging in his shop. Miro even eats his toast off one of Alan Garner’s Owl Service plates. The Miros of this world will enjoy these little gems.

The Inkberg Enigma is a great New Zealand comic, able to bridge the generations and bring reading enjoyment to young and old alike.

I would have loved this comic book as a kid and the trailer is wonderfully done. Inspiring.

Do you have an email address for book review requests?