Three cheers for the crew of the trawler San Aspiring! 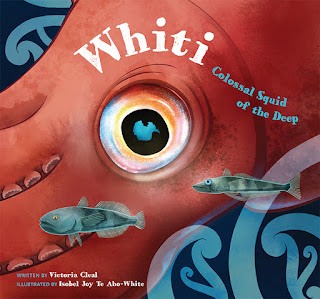 the inky depths of the Ross Sea. The obvious response would be to dump the squid but, instead. the crew packed its enormous corpse into their freezer and delivered a monster ice cube – a 495 kilogram squidblock - to Te Papa Museum in Wellington.

That fascinating word ‘squidblock’ was coined by Victoria Cleal, who is an editor and writer at Te Papa. She has written this stunning picture book which tells the story of Whiti, another colossal squid who was lucky enough to let go of her toothfish. Cleal has an engaging prose style, ideally suited for capturing the interest of younger readers.

The description of Whiti’s first appearance is typical: ‘These bulgy-eyed babies hatched from ant-sized eggs. Cute! Now they’re as big as your thumb.’ Whiti narrowly escapes being eaten by a toothfish.

You turn a couple of colourful pages and Whiti has grown. She’s now the world’s largest invertebrate and is using her eight arms and two tentacles to ensnare a toothfish. At a depth of 1,000 metres, Whiti’s red colour makes her invisible, while her eyes are ‘the size of soccer balls. They let in 144 times more light than your pupils.’

There is so much in this book that is fresh and exciting that young readers are inspired to read bits out loud. Thanks to Whiti, a generation of hapless parents are now going to have their offspring tell them that octopuses have arms not tentacles. Did you know a squid’s brain is doughnut-shaped? Don’t ask about hooks!

To show Whiti and the other denizens of the inky depths that she dominates, Isobel Joy Te Aho-White has created some stunning colour illustrations. To say that this handsome book is 40 pages long would be misleading. There are several dramatic fold-outs, which means that the differences between a giant squid and a colossal squid can be admired across four whole pages.

Along the way readers also find out about Antarctic sea-life, squid beaks, icefish, sperm whales, lanternfish, sea-pigs and king crabs. All this is a reminder that there is still a great deal that we haven’t discovered about the sea.

‘We don’t even know what a male colossal squid looks like! Nobody’s ever found a fully grown one.’

Just as the text has Māori terms gracefully inserted, so the illustrations have subtle koru in the background. This is a truly Kiwi book and an exemplar of what can be achieved with good book design.

Every so often a book turns up that impresses the socks off me. Whiti is one of those. It’s not just the skillful writing or the dramatic illustrations. It’s the way every page conveys the excitement of discovery. To read it is genuinely thrilling.

The glossary is appropriately labelled, ‘Words for colossal squid fans.’ Te Papa’s colossal squid (in its steel tank ‘the size of ten bathtubs’) is now its most popular exhibit. This book is just what the squid’s colossal fans will want to take home with them after a visit.