The only reason that the Magi brought baby Jesus gold, myrrh and frankincense was that children’s books hadn’t been invented then. Books make ideal Christmas presents but they are also excellent gifts all year round.      Here are a few enjoyable and interesting titles from 2020 that you might want to give to young readers in 2021. They are arranged roughly in age order.

Julia Donaldson, author of The Gruffalo, has created an awe-inspiring counting book with remarkable fold-out, flop-over, peep-through and lift-up delights. This clever paper-engineering does not detract

from the inspired illustrations of Sharon King-Chai.

‘Who has more babies than that?’ is the recurring question.

The first creature we meet is a mother bat flitting through a midnight scene. Lift her wing and we find a baby but tucked securely away.

‘This bat has 1 baby holding on tight

as they fly through the night.’

The revelation of the baby bat is a genuine surprise. Further surprises follow as each picture reveals its secret. The numbers build up as the question is repeated, ‘Who has more babies than that?’ Leopard, fox, owl, pig and turkey all have their offspring in crafty concealment. The text is ideal for reading aloud. (Three cubs are ‘tottering, swaying, pouncing and playing.’) The freshness of the words is matched by the sheer originality of the paper engineering, which makes every page a puzzle to be solved. The illustrations are equally imaginative and stunning. The young arctic hares are hidden by snowflakes, while the vibrant colours of the butterfly’s children explode into splendid colour. And who has the most babies? The answer is a funny one, which will have young readers leafing through the book to find what they’ve missed. 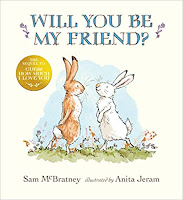 It is a quarter of a century since the picture book Guess How Much I Love You became an international best-seller. Now author Sam McBratney and illustrator Anita Jeram return with a sequel as charming as the original. Little Nutbrown Hare goes off to amuse himself. After playing with his
reflection and his shadow, he meets someone real – another young hare.  ‘My name is Tipps,’said the Cloudy Mountain Hare. ‘Will you be my friend?  Do you want to play?’

What follows is a charming sketch of childhood friendship, activity and anxiety. The conclusion is sweet. Anita Jeram’s water colour illustrations are a splendid portrayal of the exuberance of young friends. 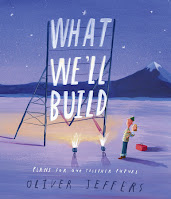 We’ll Build is dedicated to his daughter, Mari, and shows a father and daughter working together to plan and create their future world.

‘What shall we build, you and I?’ In a surreal landscape, they gather their tools and ‘build a house to be our home.’

In a lovely metaphor, they build a fortress to keep their enemies out. And, in a lovelier metaphor, they then build a gate to let them in, build a table to drink tea with them, and say ‘Sorry’. Typically, in Jefferson’s imaginative style, the enemies turn out to be such stock figures as a pirate, a witch and a giant. Imagination is given full rein. ‘Let’s build a road up to the moon!’ Then they decide to build somewhere to rest ‘for we’ll be tired soon.’ A whimsical illustration shows the pair in a hammock strung between two trees – on the moon! (Even the birds are wearing space helmets.) After other planets are explored, father and daughter build a fire – to bring warmth and comfort.

‘These are the things we’ll build, you and I’

What We’ll Build is a lively brainstorm of freewheeling imagination and love.

Andy and Terry need no introduction, as their treehouse has been regularly rebuilt from 13 stories through 26, 39, 52, 65, 78, 91, 104, 117 to the dizzying height of The 130-Storey Treehouse. This tenth volume of the saga has everything to delight loyal Treehouse readers. There is a time-wasting 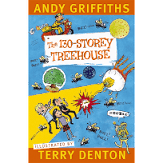 level, a people-eating plant called Petal, and a giant flying eyeball from outer space. Pretty much an ordinary day at the Treehouse, except that this one has a built-in bookshop.

My favourite part of The 130-Storey Treehouse is Andy’s battle with a pesky fly, which expands into an epic saga where the fly becomes a warrior hero with its own anthem (to the tune of Food).

Mr Big Nose the publisher won’t like his appearance on page 310 but he will sell lots of copies.