It is no accident that Sandra Morris has produced some of the most beautiful children’s books about our plants and birds. Her enthusiasm for wildlife and her skill in presenting it in both words and pictures is obvious in such titles as Discovering New Zealand Birds (1994)  Pohutukawa (2000) and Welcome to New Zealand: A Nature Journal (2015).

Her latest title North and South: A Tale of Two Hemispheres is both exquisite and original. Sandra Morris says she has “always been intrigued with the fact that the two hemispheres undergo opposite seasons at the same time of the year.”  (I remember as a child being fascinated that Dutch and British immigrant families in our school had skipped winter and experienced three summers.) 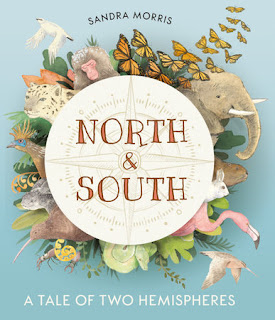 threat posed to many of them by climate change. (Some creatures originally selected, such as the Golden Toad of Costa Rica, are now extinct.) As well as the four seasons so familiar to us in the temperate zones, she also includes the Wet Seasons and Dry Seasons so crucial to the tropic regions. A series of coloured dots draw attention to the conservation status of the creatures shown. The scale ranges from ‘Least concern’ (green tree python) to ‘Endangered’ (African elephant). None of the species illustrated in this book are in the   ‘Critically Endangered’ category, but many of them (including the bar-tailed godwit and brown kiwi) are listed as ‘Vulnerable’.  Threats are listed for each creature.

There are twelve double-page spreads, one for each month of the year, with each displaying two species, one from the northern and the other from the southern hemisphere.  Each month has a unifying theme, such as Cunning Camouflage or Extreme Environment.  For example, November’s category is ‘Save it for later’. This has the hazel dormouse eating-up in preparation for hibernation while the honeypot ants are storing away the nectar of spring flowers.  Coloured strips down the edge of each page show the month chosen and its local season. Small world maps show each creature's location, with the dormouse in Europe and the ants in northern Australia. The endpapers have a large-scale world map showing the seasonal locations of all the creatures in the book.

The pictures, done in water colours, with sprinklings of salt for texture, are always appealing. Even the Saltwater crocodile, caring for her young, has a benignly maternal appearance.   Some of the creatures shown are a surprise such as the stag beetle and the portuguese man-of-war. The section on Tasmania’s eastern quoll is amazing reading and worth the price of the book by itself.

I was impressed by the care taken over the labelling and the detail made available to young readers. The educational value is greatly increased by the one-page index and two-page glossary.

North and South is an imaginative and user-friendly resource for a new generation of environmentally-aware young readers. It is also readable and enjoyable.