‘Roar with the dinosaurs!’

Dave Gunson is a gifted artist who over the years has caused me to change my attitudes to owls, bees, weta and – now – dinosaurs. 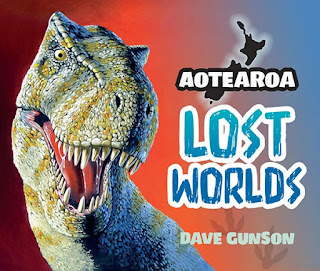 of Aotearoa New Zealand. Researchers have found evidence of everything from huge dinosaurs (Sauropods) to tiny dinosaurs (Compsognathus), giant snails to tiny mammals, giant penguins to crocodiles. One result of this continuous flood of fossils is that Dave Gunson has rewritten his earlier book on the subject, Lost Worlds of Aotearoa (2005).

The new updated version, Aotearoa: Lost Worlds (2021), has all the merits of the previous edition with the bonus of the fruits of a couple of decades of exciting research. That recently-found, long-dead mammal which joins the bats as our only known land mammal is so new that it hasn’t even got a name yet. It looks like a rat with pretensions to being a squirrel with fangs. Even stranger is Kaikoura’s giant snail, Perissoptera, with its 75mm ‘skirted’ shell covered in racing stripes.

Forming the backbone of this book are the ten magnificent double-page panoramas of our long departed flora and fauna. Each set of portraits is accompanied by a well-organised and researched descriptive key. My favourite picture re-creates some of the inhabitants of a long-gone swamp: a crocodile, a grayling, a Waitomo frog, a Giant Gecko and a Giant crab. It is a splendid scene, which is bound to inspire more enthusiastic fossil hunters. As Dave Gunson temptingly puts it, ‘For all we know, Aotearoa might well have seen some of the most interesting and unusual species that have existed, but to find out more, we have to wait for the rocks to give up their evidence.’

Coupled with the descriptions of the amazing creatures that used to roam our land is a continual reminder that they are no longer with us. Gunson has provided short and punchy narrative segments which sum up the various causes of extinction. At first these are satisfyingly remote: a possible asteroid strike 65 million years ago, violent volcanic activity and recurring ice ages. They seem to have killed off our native examples of corals, dinosaurs, freshwater turtles, crocodiles and coconut palms. As we reach more recent times, we humans begin to feel qualms of guilt. Hmm. The New Zealand Goose were all eaten by early Maori, just like the Adzebill and the Small Moa. The New Zealand Quail were all gone by 1879; one Canterbury sport shot 120 quail before breakfast. Various types of Wrens were wiped out by ferrets, rats and the resident Stephens Island cat. What about the Laughing Owl? ‘By the early twentieth century, t had its last laugh and was gone.’ Gunson writes as well as he paints and the book concludes with the Notornis and a message of hope for tomorrow.

Written in a clear style, with skilfully detailed colour illustrations, Aotearoa: Lost Worlds is easily accessible to 8 to 12 year olds, but will prove fascinating to browsers of any age.