‘I was strawberry jam in a can marked spinach.’

Kyle Mewburn is a storyteller and in this memoir she tells the sometimes painful story of how she found herself a female in a male body. By the end of her story she is at ease in her female body. This transition was not an easy one, but Kyle’s narrative skill and sense of humour sweep the reader along so 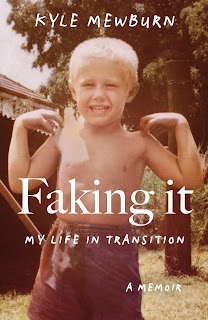 that a sometimes painful story becomes a gripping and almost painless read.

Kyle describes her childhood in 1960s suburban Brisbane and lets us share some of the harrowing stresses she endured as ‘a girl in a boy-shaped box.’ She didn’t have the world’s best parents, so family life would have been difficult anyway. Kyle found solace in books but had to be careful to choose “the boyest ‘boy books’ available”. Bright and bored, she played truant and – in a wittily described section - also turned to shoplifting Viewmaster reels. Kyle’s policeman father was not impressed.

A short-lived career as a sports reporter followed. Kyle describes covering one lacklustre football match, ‘It was the first time I was paid for writing fiction.’ Later of course, Kyle wrote many award-winning picture books and stories. Some of these tales feature in Faking It, such as the award-winning Old Hu-Hu (2009) which has its origins in the death of her grandfather.

During a marathon OE cycling tour of Europe, Kyle met and later married Marion, whose love and commitment shines throughout the book. They made their home and careers in New Zealand. Writing success finally allowed Kyle to have the treatment which would enable her to say goodbye to ‘boy Kyle’. Taking one last glance in the mirror, she muses, ‘I made a pretty good fist of being Kyle. … I’m going to miss him.’

The surgical operation which feminised Kyle’s features is described in detail in Faking It. In fact, in the course of her memoir, Kyle answers every question you might want to ask. And a few you never even thought of. Again her descriptions are both vivid and amusing. (And she has bravely included some before-and-after photographs.)

Banned from touching her post-operation nose, she recalls, ‘After five days without picking or blowing, my nose felt like a family of gerbils had moved in and begun renovating. If only they’d fix the leaky plumbing!’ Despite this witty, self-deprecating style, we are always aware of the underlying pain, both physical and mental.

Kyle seems to have found it easier to accept the bodily pain. However, the act of telling family members of the transition also created a great deal of emotional pain. Some were accepting but she hasn’t spoken with her father for a decade.  Rather more disheartening were the comments of some of the boorish males she encountered as she began her life as a woman.  It must be said that the residents of Milton and Millers Flat come out of this story well, as caring community members. And there are the many kindly souls who couldn’t handle the pronouns but wished Kyle well.  ‘Good on him,’ said one old farmer.

A bonus for male readers is that they can now find out what women talk about when they’re together down at the creek (on page 235).

As a storyteller, Kyle often creates a brief story rather than use a simple metaphor. She compares her post-operative self to a newly-hatched baby turtle digging its way out of its sandy nest and finding it still had a vast dangerous beach to cross. Now that Kyle has published this book and received sympathetic reviews and media coverage, she may be said to have reached the sea.

Lovers of children’s books will enjoy her references to some of her reading and writing, especially her first encounter with The Phantom Tollbooth and her satirical re-telling of Melu (2012) to a hui of children’s writers and artists as Melu the Non-binary Mule. Better still her next picture book is due out in 2022.

If I can add a personal note, I have had the pleasure of reviewing over forty of Kyle’s books for The Source website [https://www.magpies.net.au/] and hearing her talk at library gatherings. Earlier this year Jenny and I were at the Auckland Writers Festival, feeling a bad case of imposters’ syndrome in the lounge set aside for speakers. One of the organisers invited us over to a table to meet an author. A charming woman declared, ‘Trevor Agnew, how good to see you,’ and shook my hand. Jenny was still admiring the woman’s beautiful painted nails, when the penny dropped. Kyle Mewburn. She was happy, confident and at ease.

Perhaps the least noticed but best proof of the revised Kyle’s acceptance is that the New Zealand School Journal has published her brief, moving account of her boyhood and transition as Break-up Day. (Level 4 School Journal, May 2021.)  You can’t get more accepted than that.