I was reading John Scalzi’s Head On, when I came across a scene where an FBI agent was questioning a suspect in her massive mind palace, a virtual reality site where their disembodied personalities could meet. It contains a library of painstakingly detailed books.

The agent picks up a volume.

That cryptic exchange sent me to the library and a copy of Space Opera, the funniest science fiction novel I’ve read. John Scalzi summed-up Catherynne Valente's Space Opera best, when he wrote that it was, ‘As if Ziggy Stardust went on a blind date with The Hitchhiker’s Guide to the Galaxy, then they

got smashed and sang karaoke all night.’ This is a novel which everyone who loathes the Eurovision Song Contest should read just to encounter the Metagalactic Grand Prix for song and dance.

The next Valente title I located was the first of her Fairyland series, The Girl Who Circumnavigated Fairyland in a Ship of Her Own Making. At this point we should all remember what the great Diana Wynne Jones wrote in Fire and Hemlock: ‘Only thin, weak thinkers despise fairy stories.’

I’ll leave you to find a copy of The Girl Who Circumnavigated Fairyland in a Ship of Her Own Making. Catherynne M. Valente’s books are in all good libraries and bookshops. Meanwhile here are a couple of quotations connected to her 12-year-old heroine, September:

“…September read often and liked it best when words did not pretend to be simple but put on their full armour and rode out with colours flying." 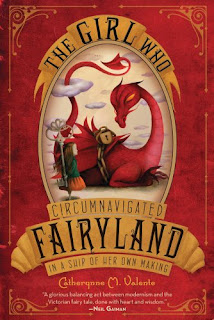 “The trouble was September didn’t know what sort of story she was in. Was it a merry one or a serious one? How ought she to act?

If it were merry, she might dash after a Spoon and it would all be a marvellous adventure, with funny rhymes and somersaults and a grand party with red lanterns at the end. But if it were a serious tale, she might have to do something important, something involving snow and arrows and enemies.

Of course, we would like to tell her which. But no one may know the shape of the tale in which they move. And, perhaps, we do not truly know what sort of beast it is either. Stories have a way of changing faces. They are unruly things, undisciplined, given to delinquency and the throwing of erasers. This is why we must close them up into thick solid books , so they cannot get out and cause trouble.”