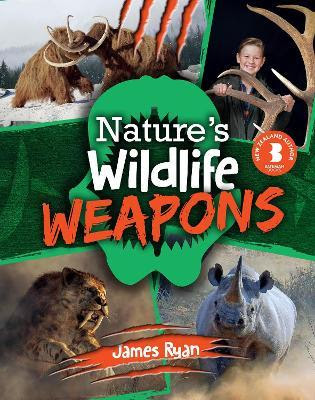 James Ryan is twelve and he has created a book that twelve year olds of all ages will enjoy.

Picture young Trevor Agnew, intrigued by skinks and geckos, popping into the Otago Museum to get a lizard identified. Now I remain fascinated by museums and I have to write a review of Nature’s Wildlife Weapons. That’s simple. It’s excellent.

James says he wrote this book for boys and girls like himself. He has succeeded in writing a lively and interesting introduction to the weapon systems used by animals. His writing style is clear and natural. ‘Tusks, antlers, horns and claws are what animals need to fight and hunt.’  Tusks, antlers, horns and claws are also what James enjoys collecting; several illustrations show items from his private collection. His interest has led James to research widely, from smilodon to coconut crab, sawfish to pouākai, megalodon to therazinosaurus.

The entertaining text is well laid out, with plenty of intriguing section headings, such as ‘What were the biggest claws ever?’ and ‘Deer with tusks – weird right?’. The paragraph ‘Gross Facts’ lived up to its name by bringing together George Washington’s dental problems and hippopotamus tusks.

James delights in the remarkable ways some creatures have developed for hunting, defence and impressing the opposite sex. ‘They show us life close up and real.’

It is no surprise that many of these well-armed creatures are no longer with us, while many more, like the pangolin and the rhinoceros are now threatened with extinction. It is ironic that protective features like horns and tusks have made some creatures vulnerable to poaching.

James has strong views on conservation and this comes through naturally in his section on elephant tusks. ‘Ivory was once used for all kinds of things – piano keys, knife handles and buttons. …Today there is no reason to use ivory for anything. These things can all be made from plastic or wood.’

I especially like the way he drops quiet little jokes into his text. ‘My mum says that my dad has mammoth meat at the bottom of our freezer.’

James also has a good feel for history. He was delighted to find that the drays carrying moa bones from the swamp at Pyramid Valley to the Canterbury Museum went right past his home. He adds, ‘When the pouākai, Haast’s eagle, was alive, they circled the sky above where I live today. And then, when they were gone, they came past one last time.’

Above all, this book radiates James’ enthusiasm for the way our museums enable us to see some of the world’s wonders. Posing with the huge jawbone of an extinct cave bear, he tells us that they were massive. ‘Standing on all fours this one could look a tall man straight in the eyes. This skull has been in the Canterbury Museum since 1874. And now we all get to see it.’ 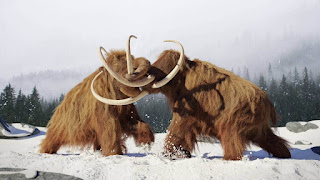 Nature’s Wildlife Weapons is well set out, with a good Glossary to help young readers. The colourful illustrations have been carefully selected to catch the attention of browsers. Here are mammoths fighting it out tusk to tusk, coconut crabs climbing trees and narwhals admiring a 3-metre tusk.

How appropriate it is that just as Nature’s Wildlife Weapons is launched, the Canterbury Museum has brought out ‘a stampede of stuffed specimens’ for its Fur Fangs and Feathers special exhibition, which runs until March 27th.

Imagine the effect it is having on all us twelve year olds.