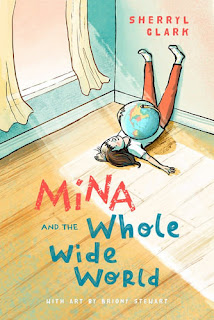 I’ve never met an Australian I didn’t like but I confess to a slight irritation at their habit of snaffling New Zealanders and claiming them as their own. Pavlovas, Phar Lap, Split Enz, Russell Crowe – it’s a long list. With my enthusiasm for New Zealand children’s and YA books, I was always aware that Pamela Allen was a Kiwi. Then I was delighted to find that Bren McDibble hailed from Whanganui. Imagine then the pleasure I gained from finding that Sherryl Clark, winner of a zillion Australian awards for writing, hails from Kawakawa. (As all Kiwis know, Kawakawa is the gateway to the Bay of Islands and the home of the world-famous Hundertwasser public toilets.)  Melbourne is my favourite city and I don’t blame New Zealanders for wanting to live there; it’s just a shame they can’t pop back at the moment.

To bridge the Tasman in a literary way, I’d like to sing the praises of Mina and the Whole Wide World, written by Sherryl Clark and illustrated by Briony Stewart. I think it’s the best children’s novel I’ve read this year. To pay the ultimate compliment, this is a story that is perfect for reading aloud to a class. There is no higher praise.

When we meet Mina, the narrator of the story, she and her exuberant little brother Georgie are at a garage sale with their dad. She buys a globe, and takes it home holding the whole wide world in her arms. Mina is excited that she is about to have her own room – mum’s old office - where she can keep her possessions, like the globe and her purple glitter unicorn, safe from little fingers.

Then she sees her parents have serious faces. ‘I see their mouths opening and closing but their words are like stones dropping into my stomach.’

They are taking in a refugee and he will have the room.

‘it’s not my room anymore.’

The new arrival, Azzami, is silent and withdrawn both at home and in school.  He is put in Mina’s class and his silence draws the hostility of ‘Oliver the drongo’.  Mina finds that because Azzami makes no response to the bullies, they pick on her. “your mate is a moron.”

When Georgie breaks her unicorn and she finds herself increasingly isolated at school, Mina resents Azzami. Then, during a writing class, Azzami comes to life drawing a picture. What Mina sees in that picture of his home in Afghanistan moves her to give Azzami a gift of a sketchblock and pencils.

A visit to see his mother in hospital has Azzami smiling. ‘his smile is like the sun coming out.’

After a crisis at school Mina punches the bully Oliver and is punished with suspension. Azzami draws a picture of Mina as her heroine Ninja Annie. ‘Azzami giggles.’ The dramatic conclusion of the story comes as Mina learns that Azzami’s mother is recovering and Azzami will be leaving soon. Azzami draws dozens of pictures and his teacher – a thoughtful woman – gets Azzami to tell the class his story using, not words, but pictures. The effect on the class is beautifully described, as is the final scene where Azzami and Mila achieve a moment of unity with the help of her globe.

The skilful illustrations throughout the text are by Briony Stewart. As well as showing the characters and their interactions, she has drawn attention to specific details. We are shown the importance of the pencils to Azzami.  The screwdriver represents Dad repairing the second-hand globe for Mina. A snail tucked into its shell portrays Azzami’s withdrawn personality.

The pictures are particularly good at showing the expressions and body language of the characters. When the class is admiring Azzami’s pictures, the bully Oliver stands alone, baffled, his arms tightly folded.  It is a powerful visual metaphor.

The book’s design by Sally Soweol Han shows flair in its layout. Each poem begins at the top of a new page and the pictures are gracefully arranged so that they appear at exactly the right point in Mina’s narrative. The reader is drawn into every page by the arrangement of word and image.

Mina and the Whole Wide World is a great story beautifully told. Young readers probably won’t even notice but this is actually a verse novel, a story told in a series of blank verse poems. Sherryl Clark knows all about verse novels. Her earlier verse novel Farm Kid won the NSW Premier’s Literary Award for Children’s Books. Sherryl gave her reason for telling Mina and Azzami’s story in verse: ‘I find the gaps that poetry leaves for the reader are perfect for telling very difficult, emotional stories where one can stop, reflect and imagine.’

Mina and the Whole Wide World is a story that will certainly invite readers to stop, reflect and imagine.

In my opinion this is the year’s best children’s novel by a New Zealand author.