Across the Risen Sea, Bren MacDibble 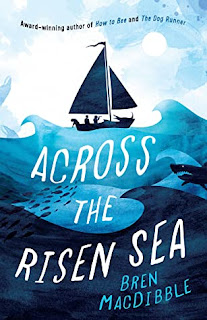 Across the Risen Sea

This is my friend Salesi and she’s a pirate and we’re rescuing you!

This dystopian novel must be unique; not only is it a rollicking adventure, it is also funny.

Old Marta, who was a young woman in the before times, is able to give Neoma (and the reader) hints of the catastrophic results of a combination of rising seas and a summer of cyclones, followed by an outbreak of disease. [This seems to have happened a decade earlier and Marta may not be as old as young Neoma thinks she is.] The Ockery Islands are former hilltops at the entrance to what has now become the Inland Sea. Other communities, such as Jacob’s Reach, survive on these islands, living from their fishing, hen runs and vegetable gardens. Sometimes the people also sail to the partly submerged tall buildings of Surf Coast to scavenge and re-use equipment and goods.

Neoma’s world changes forever, with the sudden arrival by boat of three strangers who, ignoring the villagers’ protests, chop down their trees to erect a powered signalling device.

[The parallel with flag-raising explorers of Australia, New Zealand and the Pacific creates a subtle but powerful parable.]  Marta recognises the gold headbands worn by the trio. They are from the Valley of the Sun. Neoma is baffled because all the valleys have been inundated; where can the Valley of the Sun be?

Neoma’s impulsive attempt to disconnect the device’s power source has unexpected consequences. The people return and Jag is taken away to work for six months as compensation. Worse follows. Neoma realises there has been a tragic injustice involving a neighbouring community, Jacob’s Reach, and she impulsively sets out in her mother’s fishing boat to rescue Jag. I’m the doer. He’s the cautious one.

As she sails out from the Inland Sea to the edge of the Main Sea, Neoma faces challenges from a persistent crocodile, a persistent shark and – far worse – the grim female pirate known as Pirate Bradshaw, who has all the persistence of a tax collector.

Helped by an unlikely ex-pirate, young Salesi, the unsinkable Neoma finally learns the secret of the Valley of the Sun. But can she rescue Jag? And is there any way to establish positive communication between the two disparate groups?

While a bald summary may sound grim, this is a lively and amusing story, told with vim and flair. There are half a dozen strong female characters in this novel - and that’s not counting the shark and the crocodile. Neoma, however, is in a class of her own. I can’t wait to see who plays her in the film.