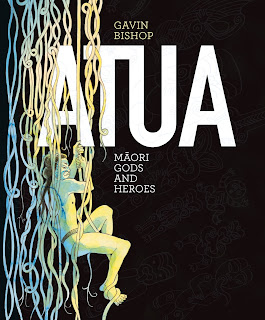 Gavin Bishop isn’t just a great artist, storyteller and speaker; he is also a great teacher. There is no suggestion that ATUA is a textbook; it’s much too enjoyable for that. It’s just that Gavin Bishop has woven a fascinating tapestry of Māori mythology and legends, then carefully inserted tufts of knowledge into his smoothly-linked patterns. The result is a splendid cloak of knowledge, to be worn proudly by any New Zealander. Opening a page in ATUA is to learn something you didn’t know and to have it firmly lodged into your memory by a well-chosen word or picture. Or both.

In simple terms, ATUA is a 64-page large format hardback; a companion picture book to Bishop’s earlier AOTEAROA: the New Zealand Story (2017) and WILDLIFE of Aotearoa (2019). In broader terms the three books can now be seen as a fully developed masterwork.

ATUA is a magnificent retelling of some of the Maori myths of Creation and the epic exploits of their gods, demi-gods and human heroes.  Myth is not a synonym for false. These are tales that the first Polynesian settlers of Aotearoa brought with them and, as Bishop gracefully puts it,  found them ‘recoloured’ by their new environment. They formed the basis for the rules and customs, religious beliefs, manners and daily behaviour of Māori tribal society. As such, they still have relevance for us today, a point Bishop acknowledges frequently. Each tribe also developed its own distinctive canoe legends and hero stories, and Bishop has drawn widely from them as well.

The book is an elegant production, skilfully designed by Luke and Vida Kelly. We begin with absolutely black endpapers. The next two pages are just as black. The text is tiny, huddled in a corner.

‘Before the beginning, there was nothing.

No sound, no air, no colour – nothing.

Out of the darkness comes a sense of waiting, followed by hints of light, and a stirring. Then a massive double-page illustration presents the great sky father, Ranginui e Tū Nei and the mother earth, Papatūānuku.

‘There they lay, clutching one another tightly, madly in love.’

And we still haven’t reached the title page!

Gavin Bishop recites his mihi and begins his story. Rangi and Papa have over seventy children: ‘all boys, all gods, all immortal.’

Two awe-inspiring double-page fold-outs provide a panorama of these gods, with seven of the most significant ones dominating the scene and the story. These illustrations are created in a range of traditional styles echoing tribal carvings and paintings.  All the pictures show the Bishop firmness of line and deft colouring that we have come to expect. (I have been lucky enough to see some of the original paintings for this book and, believe me, every page has an impact of its own.)

Before long Tānemahuta has succeeded in separating his parents. Tāne dresses and decorates his father with sun, stars and moon, then covers his mother with ‘a garment of forests’. The world as the Maori knew it begins to be created and stocked with trees, birds, insects, fish, reptiles and people. People such as Maui, Tawhaki and Kupe, each of whom gets worthy treatment. That’s Tawhaki on the cover, storming heaven.

Each double-page is a story in itself, but the user-friendly prose is only part of the pleasure of ATUA. The tale of Tawhaki’s revenge against the ponaturi (sea-spirits), who killed his father, has three imaginative illustrations. The largest shows the home of the evil ponaturi, with an articulated whale skeleton as its roof beams. The effect is delightfully creepy.

Whether they are deities, demi-gods or mortals, everyone in ATUA speaks in a fresh, informal way. When Tūmatauenga tries to separate his parents, he boasts to his brothers, ‘Get out of my way, weaklings! Let the god of war do the job.’

‘Hey, old fella, come and carry these adzes for us,’ says a woodworker to Tawhaki, ‘We’re too tired.’

Every section also carries small messages, amplifying and explaining, linking the past to the present. The page depicting Te Marama (the moon) shows and names all 30 days of the lunar cycle as well as indicating good days for fishing or planting. Neatly tucked in by the picture of the full moon, in a space no bigger than a playing card, is the story and picture of Rona and her ngaio tree. ATUA is full of tiny gems like this.

The book that began with pages of dark nothingness ends with pages showing a lively mixture of gods and well-laden voyaging canoes.

This is truly a book to treasure.